I'm excited for Billy Eichner's Bros, the Judd Apatow-produced rom-com that is being billed as the first gay entry in the field to be released by a major studio.

It bothers me that we are just now here, yet have always been queer. (Image via CBS)

Watching this interview with out journalist Jonathan Vigliotti, I realized Bros is VH1, not MTV — my dated reference will land with you, no doubt — in that they're going for married moms and such, too, considering it was for one of my fave shows, CBS Sunday Morning. They usually interview Angie Dickinson about the Rat Pack, and you can digest their fare while sipping something and making little grunts of agreement to yourself.

This is at least in part because the love interest, Luke Macfarlane, is a Lifetime rom-commer, a barrier I hadn't realized was such a big deal — but it is. 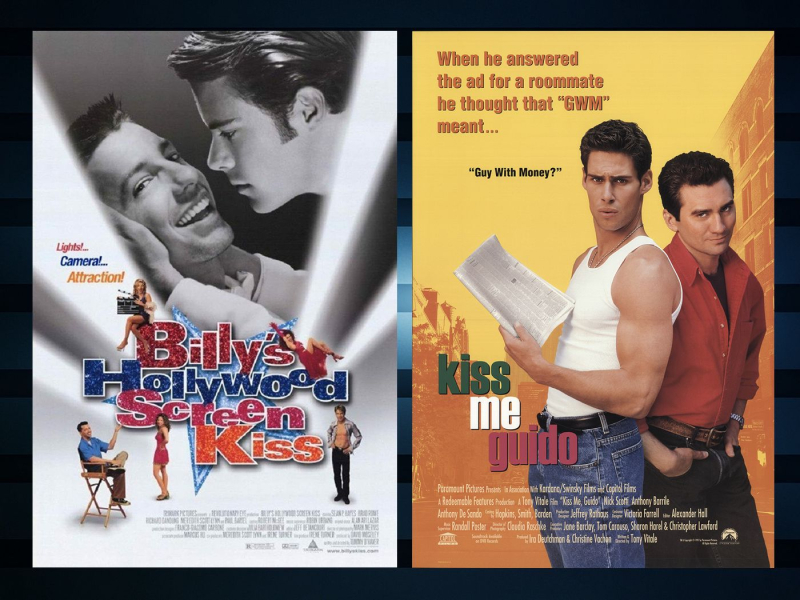 The queer film moment of the '90s kissed crossover success, then receded. (Images via Trimark & Paramount)

There have been many gay romantic comedies, and some have starred gay people (at least, they were eventually out professionally). Billy's Hollywood Screen Kiss (1998) comes to mind, and that really launched Sean Hayes, who was clearly gay but who did not come out for many years. That's another first — Bros features a cast made up entirely of queer people.

It's actually surprising for me, as a gay man, and a gay man who helped make a movie (and soon a series — I swear this fucking thing is coming soon), that until the press picked up on the marketing surrounding Bros, I may not have fully connected the dots about the film's firsts. It's like ... I or we were lulled into thinking gay was already normal, but we still had and have bridges to build.

I do remember Kiss Me, Guido (1997) having huge push as being a gay rom-com with a major studio behind it because it was distributed by Paramount. So I think at the time, they were pushing that it was the first to get distribution from a major ... but it was an indie. I enjoyed it at the time. I should rewatch. But I also know it will have 1997 tropes, so Bros promises 25 years of progress.

So kudos to Billy Eichner for dragging us over the finish line.

I hope it's so funny and successful I hate his guts after: