ABOVE: Happy 70th to Mandy Patinkin and his tucus! 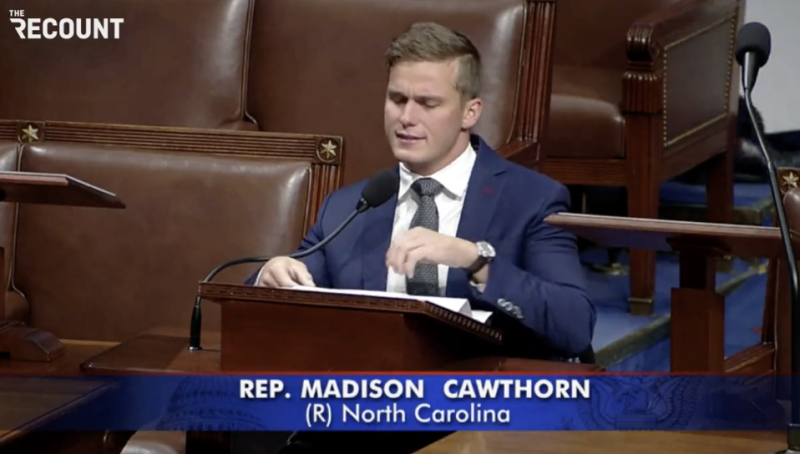 TWITTER: Rep. (for now) Madison Cawthorn (R-North Carolina) is almost a goner, but decided to make an impassioned speech about MY STARS masculinity. He's for it!

HUFF POST: Rep. Hakeem Jeffries (D-New York) has been tapped by House Dems as their future leader. He is the first Black person to lead a major political party in Congress, and was groomed (proper use of word) for that position for years by his mentor, outgoing Speaker Pelosi.

WPRI: Not a great look — gay Rep. David Cicilline (D-Rhode Island) is challenging the revered Rep. Jim Clyburn (D-South Carolina) for a top leadership spot. His reasoning is LGBTQ people deserve a seat at the table. But ... at the expense of CLYBURN? Good luck.

POLITICO: The 2024 cycle is challenging for Senate Dems, but one more opening — in reliably red Indiana — will at least present an opportunity, if the candidate is right.

TWITTER: Fascinating juxtaposition showing how Nick Fuentes — who almost everyone is against as a far-right loon — has only been saying what supposedly mainstream right-wingers have been saying, too:

Everyone agrees Nick Fuentes should not be having dinner with Trump. He should have a show on Fox News pic.twitter.com/5ccUgGswk8

TWITTER: Diego Sans, porn star, is a motherfucking idiot. Listen to him whine about people informing him that the word “tranny” is a slur and outdated — he's somehow just finding this out in 2022. (This may be from a little while ago, but it's not forever. And it's the same argument as straight people bitching about not getting to use gay slurs, or white supremacists bitching about not getting to use racial slurs without pushback.) He's SOOOO against being offended by a word. Really? So he wouldn't mind racial slurs or a straight person throwing “faggot” around? He sounds truly, truly dense on top of halting and unconvincing:

Trigger Warning // Usage of Transphobic Slurs
•
•
•
The white gays getting mad about having the word fish "taken away" from them is giving THIS energy!#Fishgate #TheChopBloque
•pic.twitter.com/BXV9TnXaUq