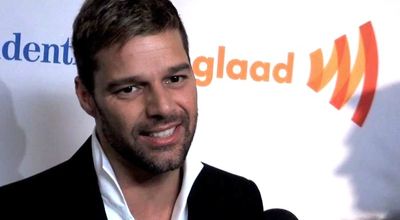 The hombre that got away

Last night was the 22nd Annual GLAAD Media Awards; it's always a fun event, if you 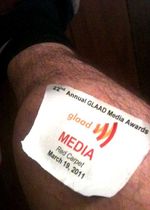 remember my coverage from last year.

This year was really fun, with one major exception—I was red-carpet robbed by this jerk who was with Ricky Martin. More on that later.

GLAAD was happy with my past coverage, so they granted me an extra body on the carpet—my partner José attended as my cameraman. We were placed just after a large column and between an adorable guy 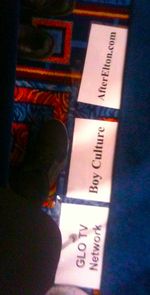 working for AfterElton (Tim O'Leary) with his pretty friend and someone's tripod. I liked our positioning in that we were at the very front of the online media and the column meant no pushing.

But the first star we encountered had been before we even got to our spots—we'd run into Joe Jervis of Joe.My.God. checking in. Joe was a nominee for his blog (the first time GLAAD has nominated blogs...about time!) and was convinced Pam of Pam's House Blend would win. "I'd bet the Powerball on it," he'd confided. (Later, he totally won, as I expected, but he had no idea until some attendees informed him since the category wasn't deemed worthy of inclusion in the actual program.) 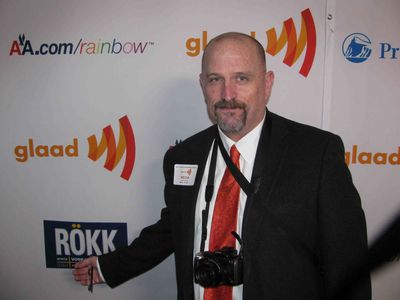 Considering some of the stars scheduled, I wasn't altogether thrilled with the carpet—Tina Fey was a nominee but didn't walk (come the fuck on, Tina), Patrick Wilson was a presenter but also was a no-show (perhaps wisely fearing being devoured and eaten a la Sebastien Venable) and the Rev. Al Sharpton was on hand to give an award to Russell Simmons but did not do press. Vinny Guadagnino from Jersey Shore? Fuhgeddaboudit. 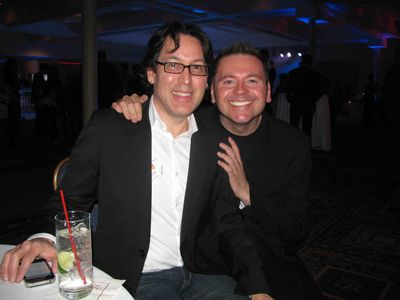 We made the evening our belated anniversary celebration

But on the other hand, the stars who actually did the carpet were nice and fun, and even Ricky Martin himself did lots and lots of press. Just not me. We're getting to it.

My first carpet catch was 17-year-old Bianca "Nikki" Peet, a dynamic girl who was initially denied the opportunity to form a gay-straight alliance at her Corpus Christi high school but whose perseverance against Principal James Crenshaw paid off—she now has her GSA club! She was the picture of intestinal fortitude in her wheelchair, her eyeshadow as sparkling as her personality.

Next up was Jarrett Barrios, who explained to me how GLAAD decides what's offensive and what isn't; a hard task, I can agree, considering the varied opinions my own occasionally outraged posts sometimes elicit. You think something is duh-obviously offensive—like that Vanity Fair piece casually calling the Glee boys "fags," GLAAD (among many others) points it out, then you read AfterElton sniping that it was no big deal. (In context, the writer was gay and felt it was an ironic or "cheeky" usage...which to me was not as readily apparent as, say, during a viewing Wet Hot American Summer.) I asked him about this more in reference to Ron Howard's "so gay" joke, which I think is a lot more in those troubled waters of nuance where a large part—if not the majority—of the public would not go along with calling it offensive. 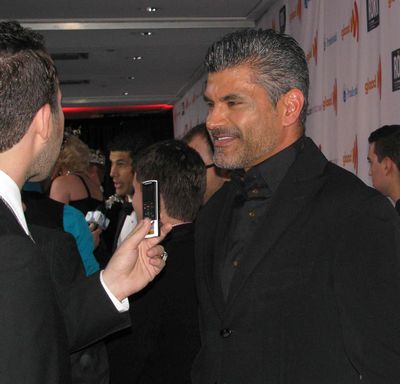 Mike Ruiz was warm and quite dashing up close—no poodle hair! He was happy to talk about why The A-List: New York seems to have at least as many haters as lovers and to introduce his boyf to anyone who asked.

I'm not a regular The Fabulous Beekman Boys watcher, but José is, and he warned me not to ask about "the pig." I knew it referred to them killing a pig they'd raised, but I imagine, "Don't ask them about the pig!" could be good advice before interviewing just about any reality TV stars. 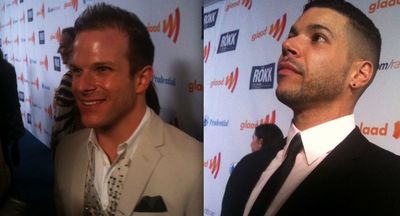 Of course I dirty-love and clean-admire Wilson Cruz—who doesn't, and why don't they? I asked him about the Glee kiss, his recent excursion into shirtlessness in bars and his pet cause (and it's much deeper than that phrase), LGBT teen homelessness. 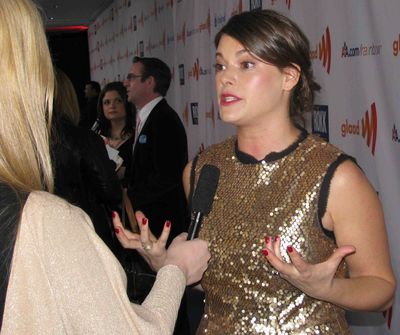 Jane Velez-Mitchell—with her bombshell girlfriend, who she meet at last year's GLAAD Media Awards—was the picture of poise and confidence, picking the Westboro clan as the gay story of the year when I asked her to choose something. The carpet had gotten a bit clogged up, so I almost missed her while jockeying to get some time with the event's host, Andy Cohen.

I'd never met Andy, so wasn't sure what to expect. I think I thought he'd be bubblier or more flirtatious but he definitely wasn't a stick in the mud. I stumped him with a question, but he recovered and was game to talk Housewives a bit. As he departed, he muttered, "My breath is atrocious!" and got some kind of oral relief from his PR walker, but it really wasn't...maybe it was mine!

Laverne Cox of TRANSform Me is as stunning as you'd expect, about eight feel tall and not shy with her "girls" or her opinions—her desire to transform Charlie Sheen was genuine and fierce. 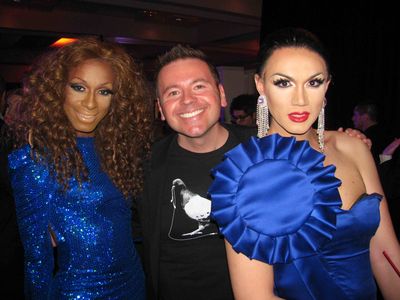 I'll have a dash of ki ki on my sandwich, please