Alex Jones Plays Megyn Kelly, Has Tapes Of Her Sucking Up To Land Interview — Proves She Sought To Normalize Jones Comments (0)

Via Huff Post: Jeez, both Megyn Kelly — formerly one of Fox News's 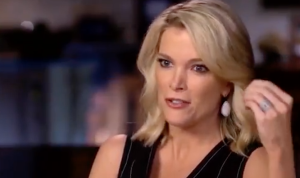 Pre-interviews are standard practice in journalism, but Kelly, under fire for giving Jones a massive platform in the form of a sit-down Q&A on her new show in the first place, comes off as disingenuous and ingratiating to the extreme in the tapes.

Kelly reassured Jones in the tapes, saying she won't be doing a “contentious, sort of gotcha exchange” interview and praising him as not being “one-dimensional” (!) before asserting:

Of course I’m doing a fair interview. I’m still me. I’m not going to go out there and be Barbara Walters.

Barbara Walters may be queen of the softballs, but she has lobbed some tough questions in her time when they weren't being directed at Most Fascinating People. Kelly should be so lucky as to end up with Walters's legacy.

My goal is for your listeners and the left, who will be watching — some — on NBC to say, “Wow. That was really interesting.” ... I'm not looking to portray you as some bogeyman or, y'know, do any sort of a gotcha moment. I just wanna talk about you. I want people to get to know you. And the craziest thing of all would be if some of the people who have this, y'know, insane version of you in their heads walk away saying, “You know what, I see, like, the dad in him, I see the guy who loves those kids and who is more complex than I've been led to believe.”

Kelly deserves to be embarrassed for going after Jones in the first place and shining an even brighter light on his idiocy. Thanks, Megyn — now you've not only honored Jones with mainstream attention, you've also been played by him.

As an advertiser, I'm repulsed that @megynkelly would give a second of airtime to someone who says Sandy Hook and Aurora are hoaxes. Why? https://t.co/luwyCwP7Ti

Wow, I am impressed that J.P. Morgan Chase is pulling some ads over Megyn Kelly's decision to give whackjob Alex Jones of InfoWars a prime-time platform via a legitimizing Q&A.

(Jones has already trashed Kelly anyway, but that's beside the point.)

Jones has suggested Aurora and Sandy Hook were hoaxes — that is so far beyond the pale, Kelly (and Trump, who loves Jones) should be ashamed to have anything to do with his monster.