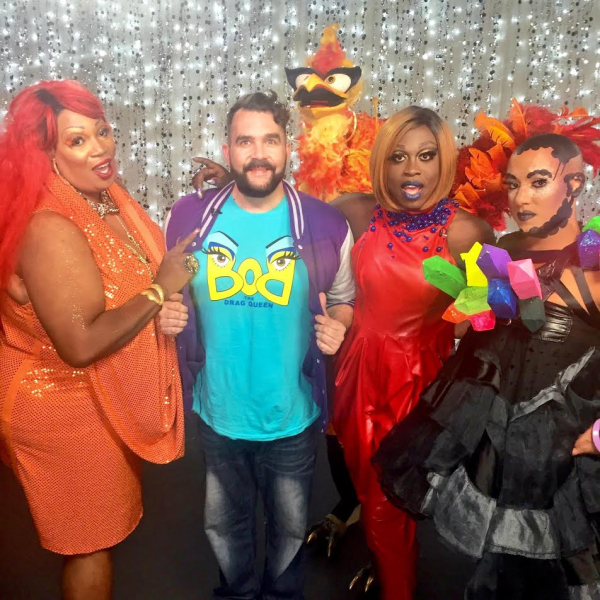 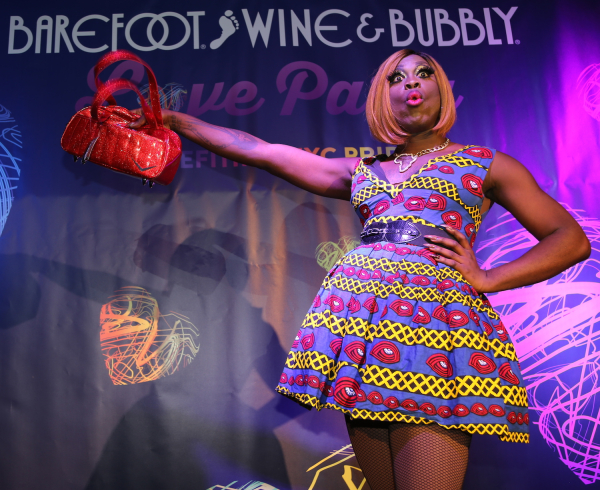 #ImWithPurse: Bob the Drag Queen was all kinds of cute. (All images in this post by Matthew Rettenmund) 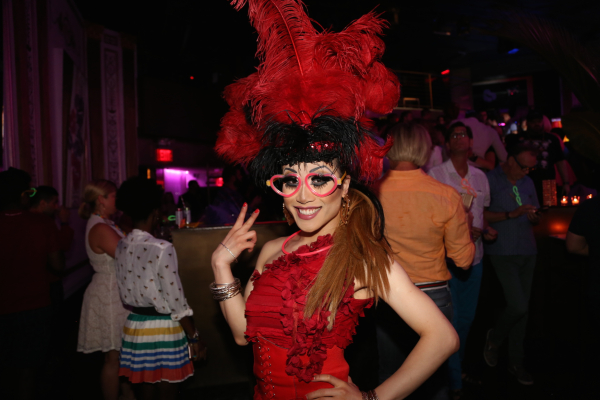 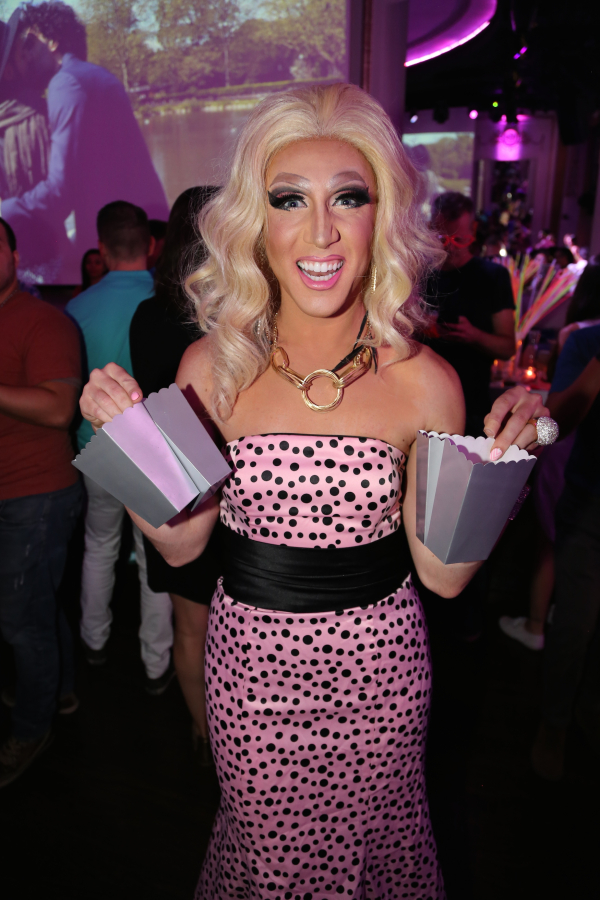 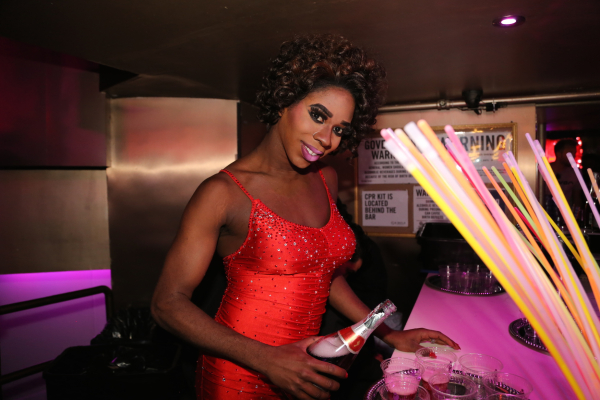 The ladies were on-point.

Held at Arena on W. 41st, the party had a long line of people waiting to get in, every last one of them cute and playfully stylish. It was like they'd been cast, and not at all like they were the result of a bunch of people hearing about a free party. I think the reason is that the party has a solid rep, so word of mouth leads to fun people telling other fun people to rush-RSVP. 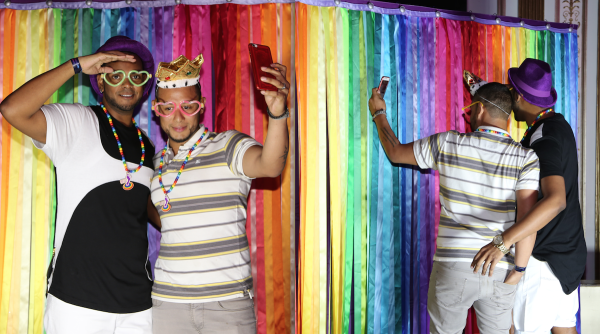 Cool 360-degree photos were on offer.

My friend and I mingled so I could capture some atmosphere shots (and by atmosphere shots, I mean pictures of cute boys whom I've asked to photograph for a change) before we settled front-and-center by the colorful stage. Beautiful space, great appetizers served by jazzed drag queens, and so, so many well-fitting summer shorts. 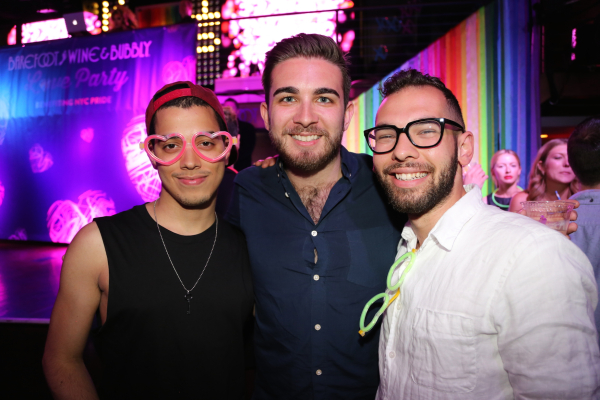 Middle hottie asked me to make him thin, which was as necessary as asking me to make all three of them cute. 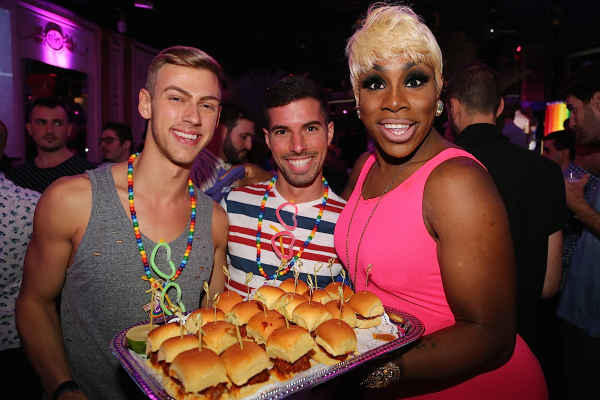 Ironic to ask someone tucking to hand out meatball sandwiches. 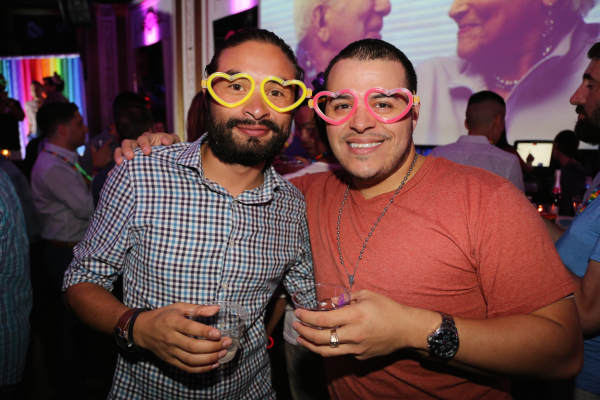 My pal David, of Passport Magazine, made it a family affair, inviting his cousin from Latin America. 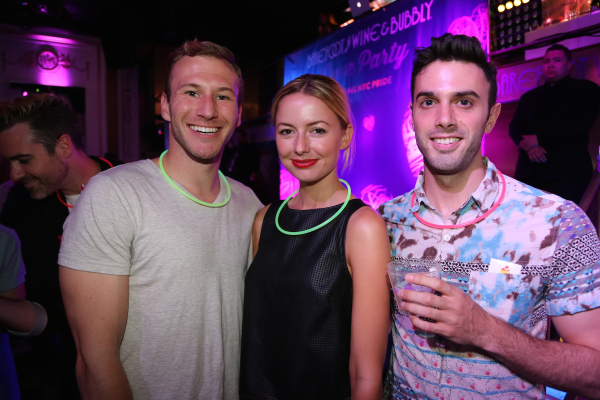 As the kids would say when faced with so much beauty: UGH. 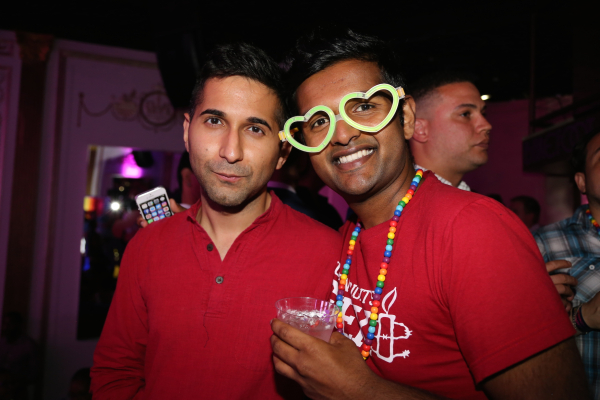 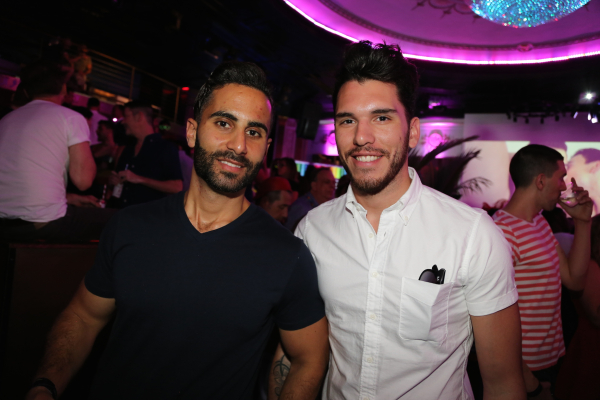 Looks like they read a Grindr profile that said “be good-looking” and complied fully. 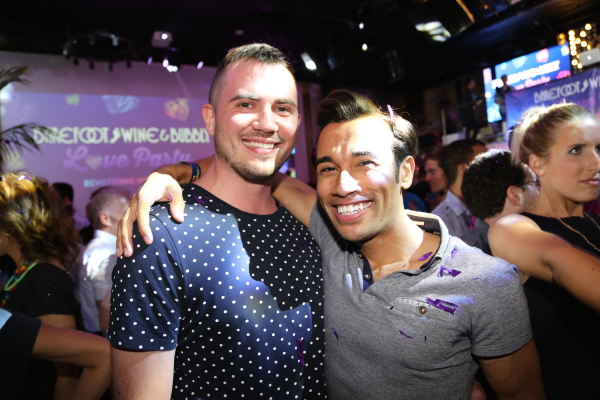 Mimi Imfurst was an inspired DJ—the playlist was a healthy mix of classics and neo-classics that had everyone mouthing the words so everyone else would see them and realize they were cool. 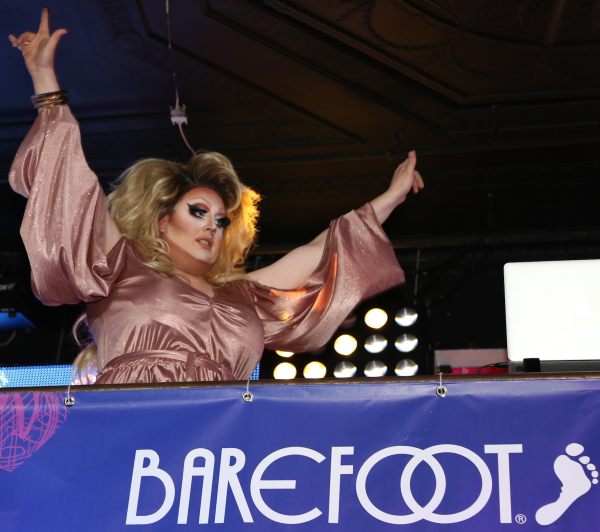 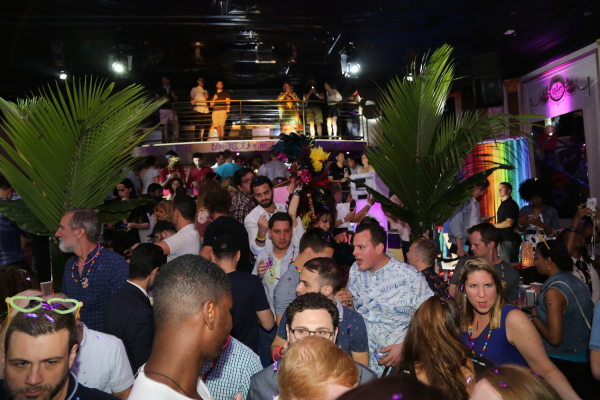 That place was crowded!

Up behind the stage, beyond a pane of glass, we could see a blonde drag queen being made up as flashes went off, but none of us could tell who she was. Turns out she was a she: The Real Housewives of Beverly Hills star Erika Girardi aka Erika Jayne arrived in a hot, black, form-fitting bodysuit and hair reminiscent of the mane sported by Madonna for her Prince tribute. 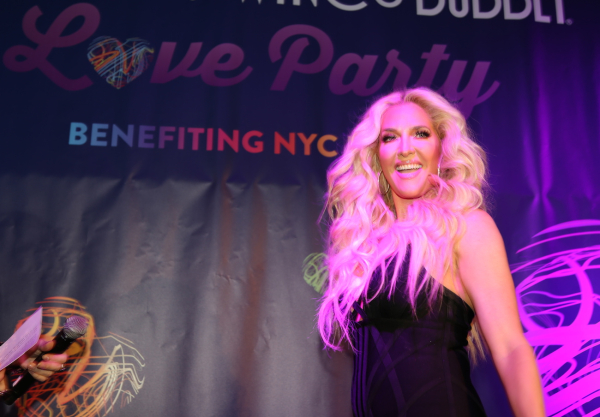 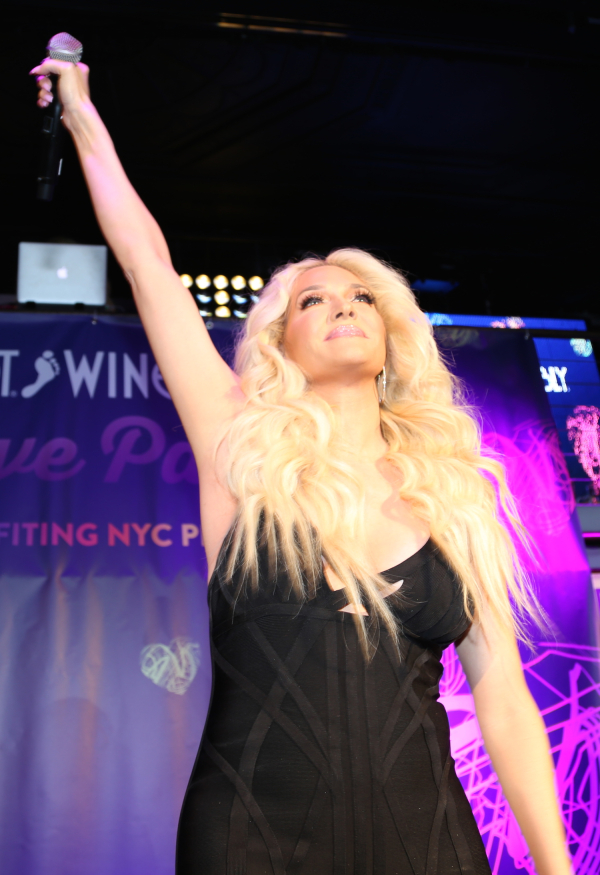 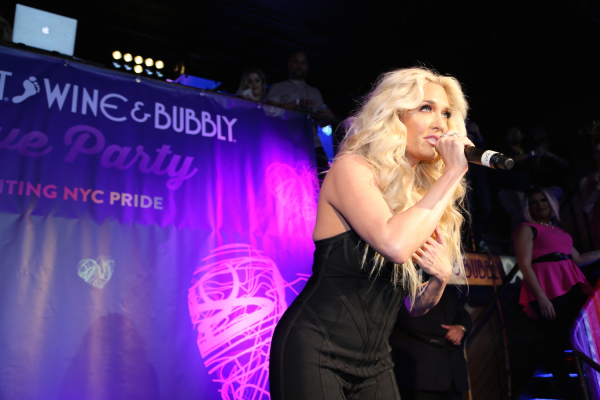 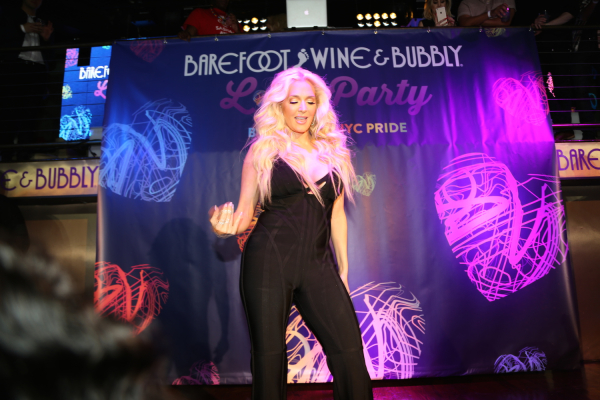 Erika Jayne stands with all LGBT people ... stands, and pats the puss right along with us.

I doubt anyone will accuse Jayne of queer-baiting, but she essentially showed up, told us she loves us, said her name so we'd remember it, and left. No complaints here—it was lovely of her to come, and people were excited to see her.

Killing time while RuPaul's Drag Race fave Latrice Royale prepped, Jayne even came back out to give us a quick sample of her (in)famous dance move—the patting of the puss. You can imagine exactly what it looks like. 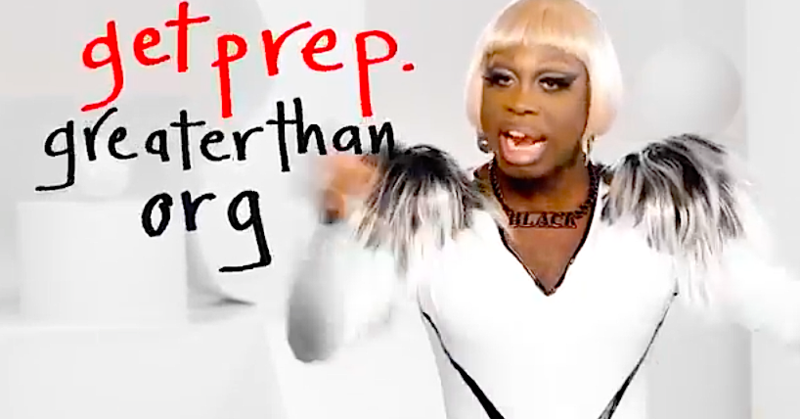 While Bob the Drag Queen's “Purse First” may be more entertaining, her all-in PSA for PrEP is more educational; the most recent winner of RuPaul's Drag Race is reminding everyone that PrEP helps to drastically reduce the chances of contracting HIV ...