In a shocker, Ted Cruz—after losing today's Indiana Republican primary, has dropped out of the race for president. (Carly Fiorina's veep run was historically short.) Will he try for convention mischief? Will John Kasich follow suit? No matter; Donald Trump is now the presumptive nominee.

On gay issues, it's great, in that Cruz is by far the more virulently, legitimately anti-gay candidate between himself and Trump. But Trump is an ill-informed, erratic blowhard, and he is now one step closer to being a major-party nominee. 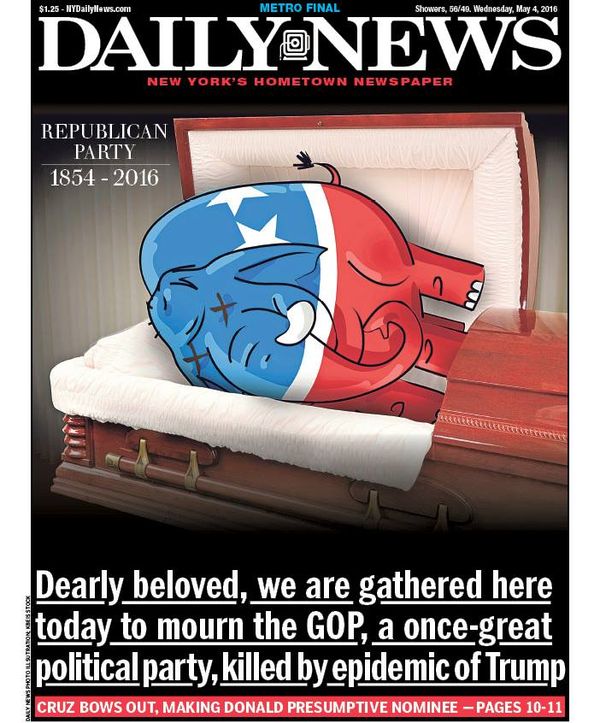 Depressingly, Bernie Sanders scored a surprise win in Indiana—which is an open primary—and now gets to continue attacking Hillary Clinton as if she has been “anointed.” You know, those decades of public service don't really count when you're crowned. Ugh.

Now, even though Sanders won an open primary (so non-Democrats got to vote) and spent millions to win it, we get to endure him attacking Hillary Clinton all the way to the Democratic convention, where Hillary will be the nominee on the first vote.

From now until then, Hillary can't entirely shrug off her battle against Sanders, and will also be getting body-slammed by Donald Trump every single day. Like he did in his speech tonight, saying Hillary would be “a very poor president.” I wouldn't be surprised if his next attack is something like: Hillary's so terrible she can't even sew up the nomination like even IIIIII have!

Just let me know when she officially has the nomination and Sanders has thrown his support behind her, because I'll believe the latter when it happens.

Final thought: We need to focus on beating Trump, not beating up on inevitable nominee Hillary.

Heading For A Fall Comments (0)

Carly Fiorina took a tumble off stage today while introducing @tedcruz at a rally. Ouch. pic.twitter.com/PmzkTTkTVo

Gotta love watching Carly Fiorina fall off a stage after introducing running mate Ted Cruz, as if disappearing through a trap door.

In spite of loathing him and saying he'd say anything to get elected, Carly Fiorina—hitting the panic button over Donald Trump—has frantically endorsed Ted Cruz!

Farewell to @CarlyFiorina. It turns out you can’t flat-out lie to the American people about Planned Parenthood. pic.twitter.com/13TxefxnV2

Planned Parenthood says so long to Carly Fiorina, one of its fiercest foes, as she drops her prez bid.

Due to the above, Marco Rubio's big-money backers put their bucks on pause.

Long reads: “The Case for Hillary.” Also, the case against.

NH gay man loves Carly Fiorina, who congratulated him on his wedding.

Ryan Reynolds: “I may be sitting on this man's face at some point ...”