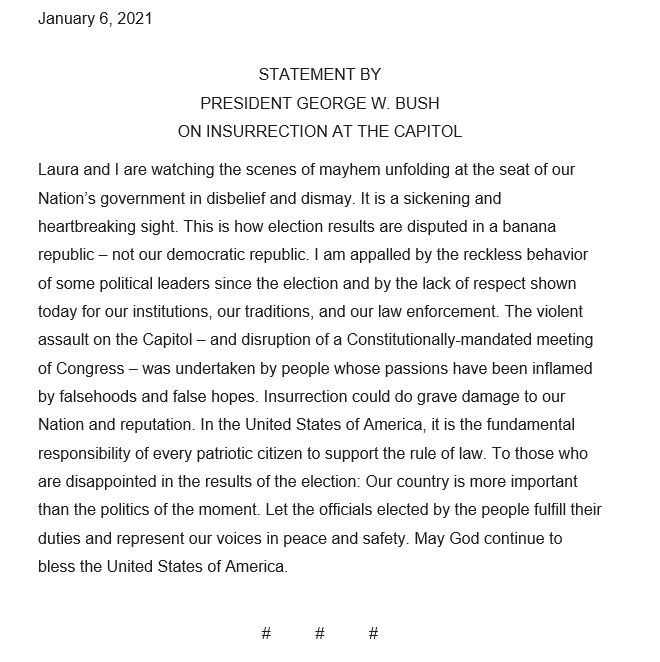 ABOVE: Even Bush can't believe how much worse Trump is than Bush. BELOW: And even Romney is done with this shit.: 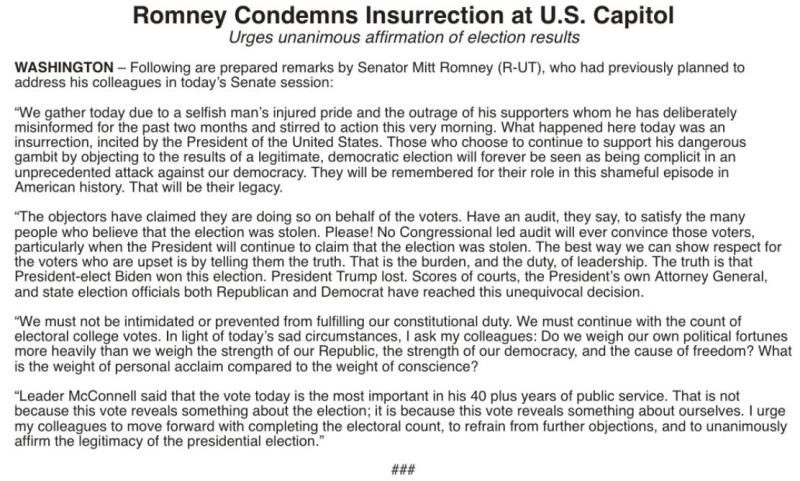 POLITICO: After the Capitol was (allegedly) secured, senators are aiming to certify Biden via the electoral college procedure in a late-night vote: “These thugs are not running us off.”

TWITTER: Richard “Bigo” Barnett, 60, of Gravette, Arkansas, should be going to prison for a long time:

Here’s Mr. Barnett, who goes by “Bigo,” telling the story in his own words pic.twitter.com/oSyKiCDXgy

DAILY KOS: Trump, in a video and in tweets, told the insurrectionists he “loves” them, calling them “very special.”

SAINT ALBANS MESSENGER: Republican governor of Vermont calls for Trump to be removed from office for inciting insurrection:

The fact is the results of this election have been validated by Republican governors, conservative judges and non-partisan election officials across the country. There is no doubt that the President’s delusion, fabrication, self-interest and ego have led us — step by step — to this very low, and very dangerous, moment in American history. The fabric of our democracy and the principles of our republic are under attack by the President.Enough is enough. President Trump should resign or be removed from office by his Cabinet, or by the Congress.

TWITTER: A sobering reminder that the Confederate flag was never paraded through the Capitol during the Civil War, when the Confederates were 100 miles away:

Take this in: Never once, in the years 1860-1865, was this flag ever paraded in the halls of the American capitol. pic.twitter.com/NFFVM0aSY0

THE HILL: Incoming Rep. Cori Bush (D-Missouri) introduces legislation to sanction and/or remove all the House members who challenged the election results.

THE AP: The insurrectionist shot inside the U.S. Capitol building has died.

Losing the U.S. Capitol during a key electoral procedure to a modestly-sized crowd from a publicly-announced event is not a "failure." It was a decision. They were ordered to not do what they normally would've done. We need a full accounting of every single official involved. https://t.co/YiuqCicEJ0

TWITTER: This fucking bitch went on camera to whine about being maced, then openly admitted she was participating in insurrection. It's a “revolution!”

“Ma’am what happened to you?”