BELOW: Keep reading for gay South African lust, Pitt as Fauci, Birx gives Trump cover, the end of double-spacing as we know it and more ...

We Will, We Will Clorox You!: Trump Suggests Mainlining Bleach Comments (0) 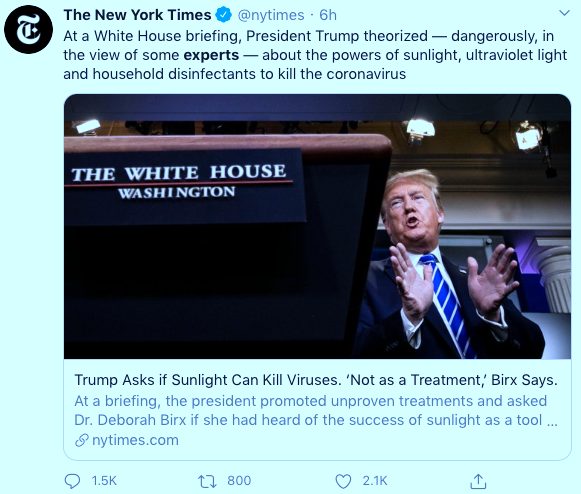 I had a Republican on Twitter earnestly tell me there is no right way to approach the COVID-19 pandemic, in reference to whether we should re-open the U.S. now or later. Welp, I'll tell you one thing, there is a right way to handle suggestions that we injest bleach to kill the virus — and that right way is to not. To just not.

But that is what Trump said Thursday:

After hearing presentation President Trump suggests irradiating people's bodies with UV light or injecting them with bleach or alcohol to deal with COVID19. pic.twitter.com/cohkLyyl9G

Trump is high on light and high on bleach and, well, just high.

His outrageously dangerous, am-I-in-a-fucking-DREAM? comments were taken by propagandist Dr. Birx this way:

Here is Dr. Birx's reaction when President Trump asks his science advisor to study using UV light on the human body and injecting disinfectant to fight the coronavirus. pic.twitter.com/MVno5X7JMA

This Oscar-ready short subject should be called If These Scarves Could Talk.

As utterly idiotic and unscientific and scary as Trump's comments were, The New York Times — remember, the so-called liberal rag — could only muster that his comments were dangerous only in the view of “some experts.”

Just some. People are talking. Just some; the others are dead.

Some experts are anti-bleach ... not including Cristina Cuomo, who — and she is a loon who has Chris Cuomo whipped — bathes in a “nominal” amount of bleach, which is 100% not a good idea.

I was reading on Twitter an informed opinion stating that Biden needs to do more with his messaging, but in my opinion, Biden has to do two things: Remain alive and not be Trump. That's it. Is it sexist that Biden isn't the candidate Hillary was and will win? No, because Trump is not the candidate Trump was. Trump is now fully revealed. Trump is the guy who wants you to do bleach shots, while Biden is not.

BELOW: Keep reading for a DNA lottery winner, sobering COVID-19 predictions, a heartwarming blast from the past, the death of a soap star and more ...