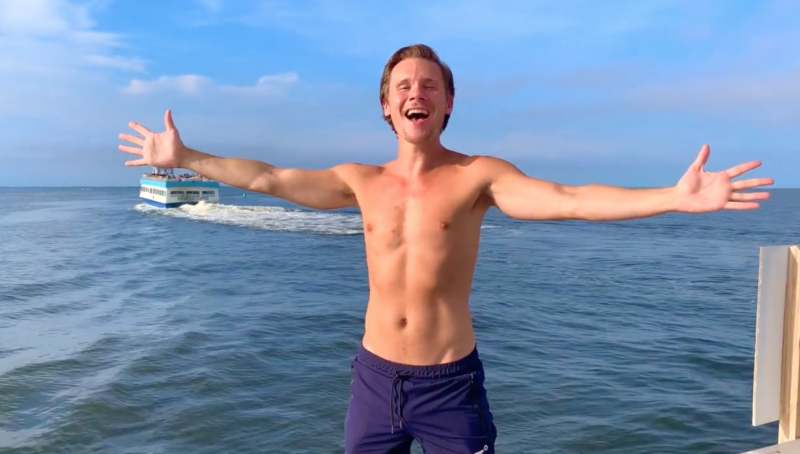 Below, singer Seth Sikes turns in “Fire Island Ferry,” his take on “On the Atchison Topeka and the Santa Fe” from the movie The Harvey Girls.

“I’ve been hiding out on Fire Island since COVID hit and learning the tricks of the trade: editing, sound mixing and writing,” he reports. “If we never get back to normal, then at least I’ve learned a new skill.”

It's an excellent match; I think Judy Garland would have approved, and I know Vincente Minnelli would have ... 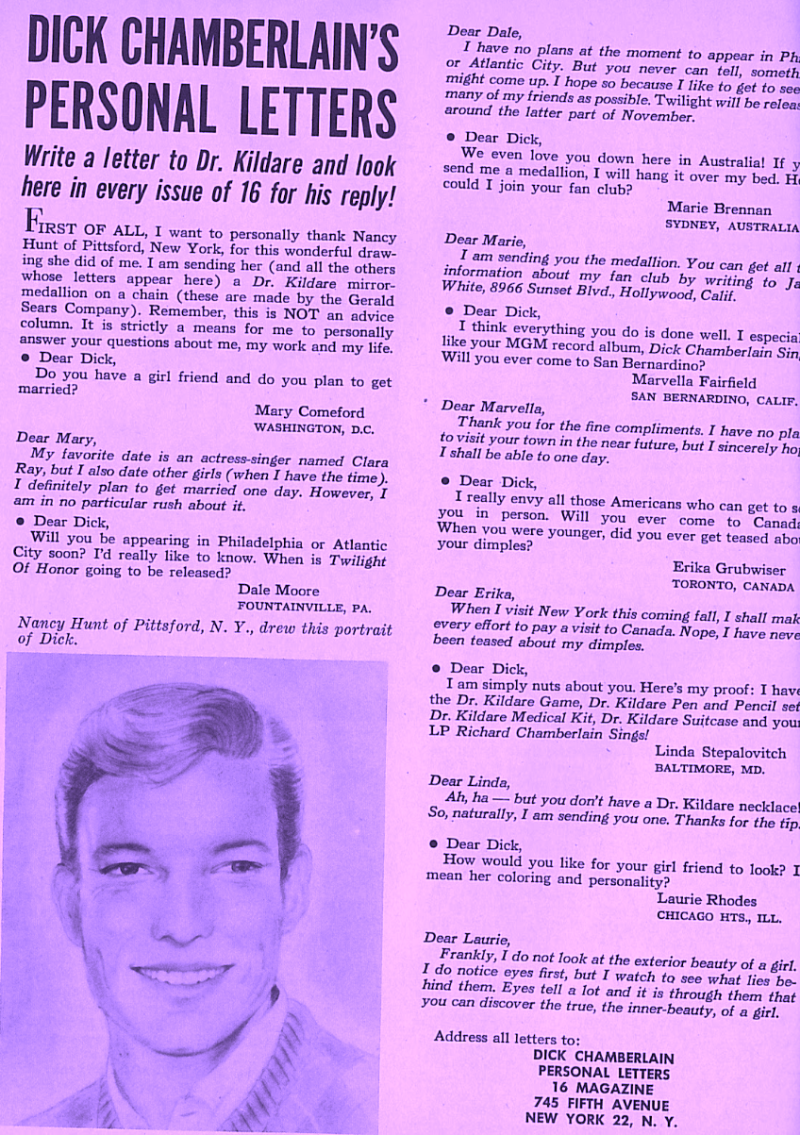 Poseidon's Underworld: Explore every gay angle of a 1963 issue of 16 Magazine. [Screams of teenyboppers] 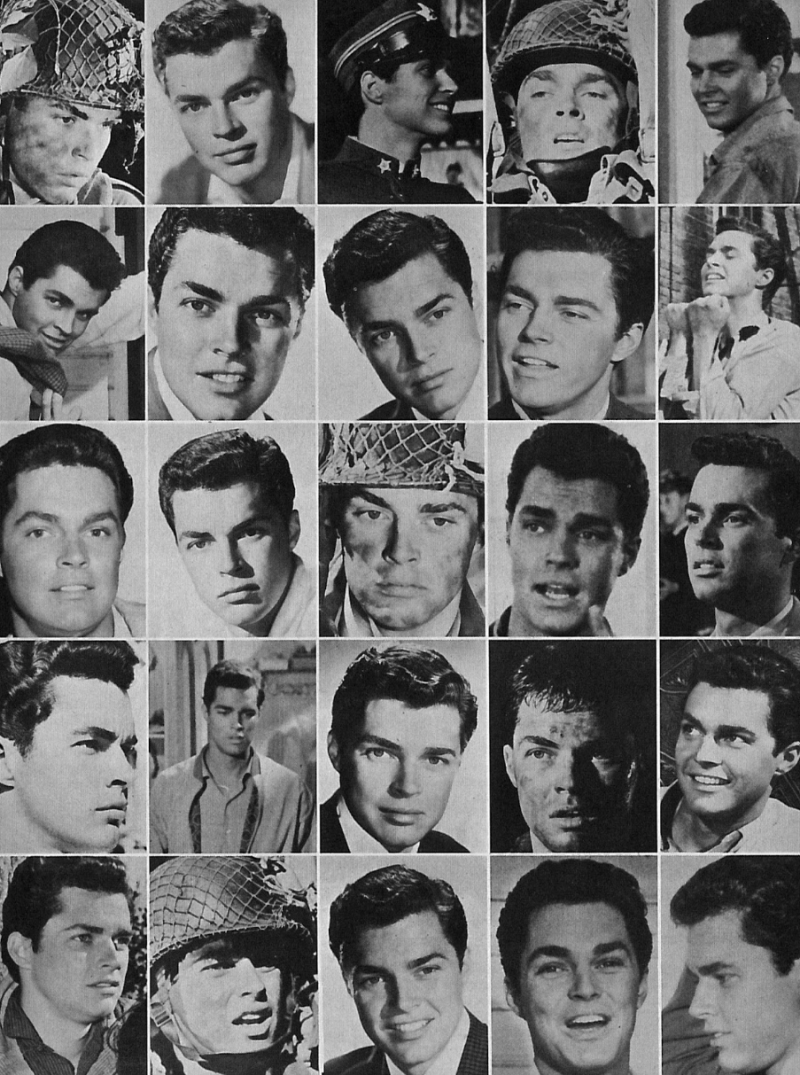 Here's Richard Beymer, kids — a whole lot of him.

Huff Post: Rep. Elijah Cummings (D-Maryland) points out that Trump may have fired Preet Bharara to hinder investigation into his own corruption.

Attitude: Why is Joan Collins still confused with Alexis Carrington? Because I was so bloody good, she asserts. Here's her fave Dynasty catfight:

SNL: (1) That funeral sketch about a dentist who secretly wrote lit circuit jams was the meth of humor, especially “Here Is My Butt as I Lean Against the Wall”:

What The H-E-Double-Hockeysticks Is THE ADVOCATE Doing Publishing Anita Bryant-esque Poo-Poo Like This? Comments (0)

That's the problem — gay people get very punchy when stories are presented as OURS. (Image via THE WALL)

There's an absolutely nails-on-the-chalkboard, ranty essay over at The Advocate from a person I've never heard of before, a fitness professional named Jason Wimberly. I guess he's worked with Selma Blair and Jane Lynch.

The piece is about how Logo's reality series Fire Island looks like it will contribute to “Gay America's Moral Decline.” This, he has decided based on a 90-second trailer:

I urge you to put aside any negative feelings you have about the actual place Fire Island, A-gays, people with great bodies who show them off and the reality craze in general. I am not drawn to this show and am not attempting to defend it. I would say it looks to me like it's seizing on a colorful segment and situation of the gay community as a way of luring eyes and, based on some of the clips, possibly to address issues of interpersonal relationships while still providing plenty of escapism.

Getting back to Wimberly's Advocate piece, what embarrasses me about the gay community is not that we've fallen so low as to have a show like Fire Island and men who spent their summer chasing fun and excitement — that has been happening forever! It's part of the human condition, and more specifically, gay men have been having a blast on Fire Island for better or for worse for the better part of a century.

What bothers me is that a truly historically important outlet like The Advocate is now reduced to (effective!) clickbait like this fussy piece, which is ostensibly bemoaning the existence of a gay TV show on a gay network, but which actually delivers some tone-deaf messaging that's straight-up anti-gay.

Wimberly starts with a story to which we can all relate, involving how people have become entitled and rude. Fine.

Next, Wimberly slides into fantasyland, where he actually argues that the use of curse words is a major issue:

I remember when the use of “bitch” on television was a national debate. Now curse words are commonplace in all forms of media ... Now, I have to be fair in saying I uphold myself to some pretty strict standards. I don’t use the f word ... As a public person, I take the way people perceive me seriously, and not just because of my own self-respect, but for my respect for the LGBT community as a whole.

Seriously? That's laughable. Swear words are a very expressive and creative part of any language, and are often very effective when making a point. Can you imagine a pioneering gay civil rights activist— you know, a gay person any of us has actually heard of, which should be the definition of a public person, and who has actually done something constructive for the cause — worrying about swearing? That's a major issue?

It goes from bad to worse, but I don't believe most Advocate commenters will really consider Wimberly's words, because they'll be so caught up in the bashing of Fire Island (damn pretty people!). Wimberly actually makes the self-loathing argument that LGBTQ people need to present a sanitized image (what else is not swearing and carousing?) to non-straight people in order to win equal rights:

As a minority group, the actions of a few can unfortunately shape the view of many. Giving this sort of behavior a national platform where it becomes normal and invited into our homes is the problem. By all means, live your life and have fun as long as you’re not hurting anyone else. My issue with all this, though, is that I do feel it can hurt others simply by allowing it to be so common.

So now a TV show by and for gay people that shows us doing things that most people like to do (drink, party, have fun summers, have sex) is detrimental to our image, and is giving us a bad image? Does this person really believe that that has anything to do with the status of our rights? How very homocon of him.

I'll repeat a bit of what I wrote as a comment on Wimberly's poorly written, illogical and dangerously shallow piece:

The Boys Of FIRE ISLAND Address Their Haters: IT'S NOT JUST ANOTHER GLAM, SUMMER, FINANCIALLY BANKROLLED, POINTLESS EXPERIENCE Comments (0) 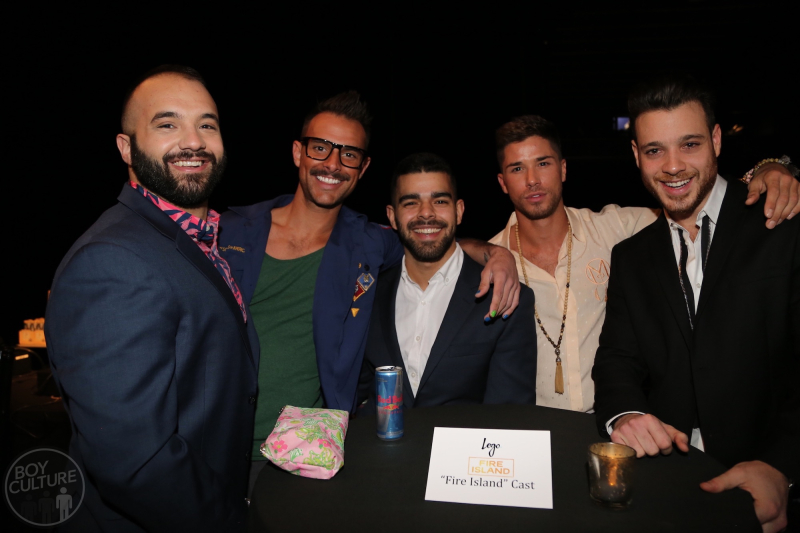 Gay Twitter is rejecting Fire Island — Logo's forthcoming reality series based you know where — so I asked the guys, at Tuesday night's RuPaul's Drag Race event, to address their haters.

Check out my brief chat with the boys in the sand ...