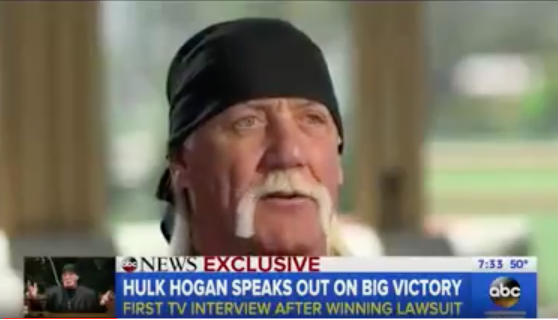 UPDATE: Jeff Bezos of Amazon, Peter Thiel's peer, has smacked him down for his war on Gawker.

I understand lots of people hate Gawker, though I think it boasts tons of really thought-provoking, funny, original pieces along with some salacious gossip.

In its war with Hulk Hogan, I've already reported that contemptible right-winger Peter Thiel has bankrolled Hogan's legal pursuits, clearly to settle a score—and this is a terrible precedent.

As pointed out by the New Yorker, this case—with its not-so-noble anti-hero (Gawker)—could play right into Thiel and his pick for prez (Trump)'s hands: They want to weaken the free press so that it won't mock the foibles of the elites like them. Imagine Trump gaining access to the presidency and doing away with the Sullivan rule?

Per the New Yorker:

Remember that Thiel is a graduate of Stanford Law School who clerked for a year on the Eleventh Circuit, and that, in his world, “scale” and “disruption” are the hoped-for ends of every investment. He is surely aware of this case’s potential to begin a reëxamination of the fundamental questions in American press law, far beyond the fate of Gawker.

The effect would be chilling. We have to put aside any disdain we (you, not I) have for Gawker or any other fanged media and keep our eyes on the ball—the free press should not be intimidated to report, even negatively, on every aspect of a public figure's life, particularly ones who have a huge say in the media himself (Thiel is on Facebook's board) and ones with enormous political sway (Thiel and Trump).