BELOW: Keep reading for a Tyler vs. Dylan battle, a DC Comics breakthrough and more ...

Olympic diving legend Greg Louganis is opening up about his family history, telling PEN about the various issues he faced having been adopted and raised by parents whose love he questioned as a rebellious and confused teen.

Incredibly, he first met his biological father at age 24 while making an appearance for Speedo in Hawaii.

Greg Louganis To Get His First-Ever Wheaties Box Comments (0) 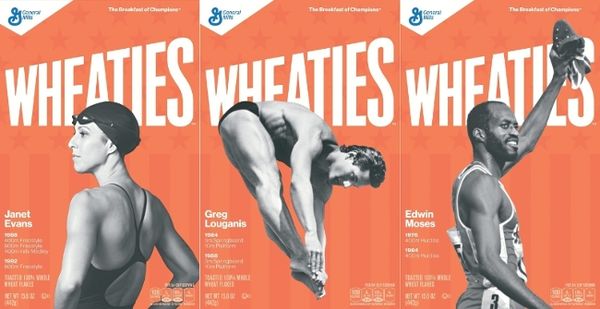 These three boxes will be on sale from May through the summer. (Image via General Mills)

Over 30 years after his 1984 sweep of the 3m and 10m diving events in the Summer Olympics, out athlete Greg Louganis will finally be honored with a Wheaties box.

An online petition for Louganis to receive the honor attracted 41,000 signatures. It seems pretty safe to guess that homophobia kept Louganis off the box in the '80s; he didn't come out until 1994, but certainly there were plenty of rumors, and those may well have led Wheaties to back away from the champion diver.

Four-time gold medalist Janet Evans and Guinness World Record title-holder Edwin Moses—who along with Louganis were both previously overlooked—will also be honored with their own boxes.