BELOW: Keep reading for Trump's acquittal (for now) by the Senate (forever), a new gay movie with the late Cloris Leachman, hot men in kilts and more ...

ABOVE: My kind of lounge act.

ABOVE: That masked man.

BELOW: Keep reading for a Grindr love story, Tuberville indicting Trump with his words, the country's most famous anti-vaxxer de-platformed and more ...

BELOW: Keep reading for impeachment gossip, how Romney was almost slaughtered on January 6, Adam Rippon's engagement and more ... 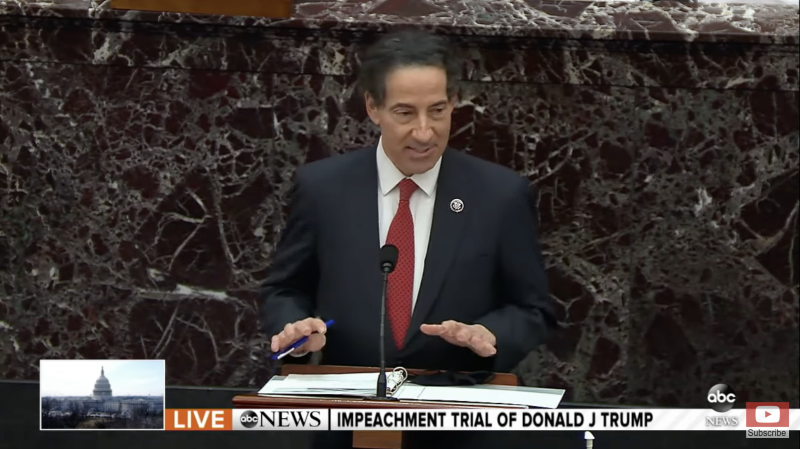 Raskin, from the left, is on the right side of history. (Image via video still)

Rep. Jamie Raskin (D-Maryland), lead House manager for the impeachment trial of Trump, connected with his moving story of what happened on January 6.

Everyone trashed Trump's legal team. Trump was said to have been apoplectic over their performance.

After Raskin persuasively made the case that convicting Trump post-presidency is perfectly constitutional, the Senate voted in favor of that assertion — but only six Republican senators agreed. That means every other Republican senator is so married to Trump they are pretending to believe that if a president commits high crimes and misdemeanors in the final weeks of his or her presidency, they simply do not count.

ABOVE: Remembering Jimmy Olsen himself, the gay actor Jack Larson, on his b'day.

BELOW: Keep reading for hot Hemsworth, a gay Big Brother, Fetterman running and Saxby not running, another GOPer dead of COVID-19 and more ...