Saved From Cancellation: Is There Any Way For Public Figures Who've Disappointed NOT To Be Exiled? Comments (0)

In a widely shared New York Times interview with the cast of Arrested Devlopment that became very awkward during a discussion of Jeffrey Tambor's on-set behavior (he was in the room), Jason Bateman and other male cast members came off as minimizing what co-star Jessica Walter was saying Tambor had done to her at work — namely, verbally harassed her (not sexually) and yelled at her in a way she emphasized was not normal and not okay.

Bateman in particular was singled out for seeming to talk over Walter, and seeming to excuse Tambor's behavior as being a part of the creative process.

I for one felt it was fair to criticize him for how he came off in the interview, but I was also taken aback by the vitriolic response on social media, which made it seem as if Bateman and the other male cast members, in not coming to Walter's defense in a full-throated way, were as bad as Tambor, with people calling for boycotts of his future work. I felt it was more a tone-deaf response on Bateman's part; it was clear he was trying (way too hard) to smooth things over.

Is there no middle ground for public figures between flawless and canceled? Is it not possible to criticize Bateman, check his response, and go from there?

Now, Bateman has issued an apology, one that seems to reflect his understanding of what he got wrong.

If Jessica Walter can forgive Jeffrey Tambor and work with him closely again and call him her friend, I don't understand why fans of the show (full disclosure: I've never watched it) or just casual observers of the situation can't take a breath and calibrate the outrage. Bateman was wrong, he knows it; he's not Harvey Weinstein.

The same goes for the new revelations that Morgan Freeman sexually harassed women on movie sets and at work. The description of his behavior is gross — lifting a woman's skirt, telling a pregnant woman he wished he “was there” (at the time of conception, ick). The response from many has been akin to the relevations that Bill Cosby is a serial rapist. Really? What Freeman did (the stuff we know about so far) is boorish, it's wrong, it shouldn't be blown off, and that it happened at work makes it, legally, sexual harassment. But is it so beyond the pale that it cancels the 80-year-old's legacy outright?

Is there no way to acknowledge wrongdoing without completely rejecting a person's overall life and work?

I've been thinking about this a lot as a pop culture junkie. Joan Crawford abused her daughter. (And it turns my stomach when gay fans mock that daughter using words that minimize physical and mental abuse, like suggesting Christina was spoiled, ugh.). Joan Crawford was also one of the most compelling movie stars of all time. Charlie Chaplin was a genius as a filmmaker and actor. He also probably slept with underage girls. John Lennon was a brilliant poet and musician. He was probably physically abusive toward his wives.

The list goes on and on and on, and it includes household names who are/were racists, who are/were guilty of inappropriate sexual behavior, and who are/were flawed in very real ways nobody should be overlooking or underplaying.

But if Jason Bateman and Morgan Freeman and others who did wrong or who enabled wrongdoing are canceled, where do people stand on enjoying “Billie Jean?” Why are some icons spared, while others are taken to task, and taken out with the trash?

It is a difficult concept to wrap our heads around — on the one hand, if someone rubs you the wrong way (I despise Roseanne Barr), no amount of cajoling will get you to give them another look. On the other, should offenders be denied the chance to continue working? I think I take a more Sarah Silverman approach — in speaking of her great friend Louis CK, she abhorred his actions but said he should still be able to be an artist.

Above: And suddenly, I am a cat lover! 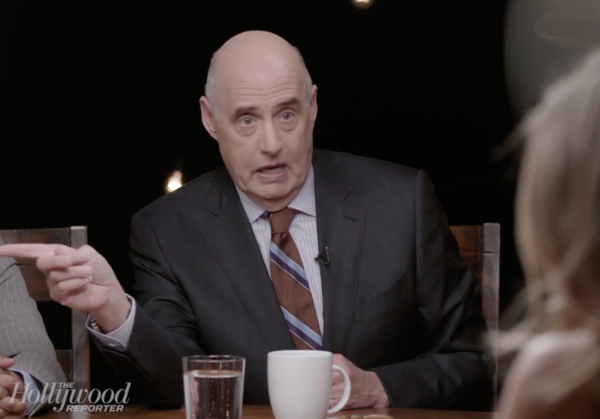 One thing I am now thinking is that Tony Hale and Jeffrey Tambor should play father and son in something funny.

But beyond that, they join Jerrod Carmichael, Anthony Anderson, Rob Lowe, Aziz Ansari and Keegan-Michael Key in an entertaining most-embarrassing-moments roundtable for The Hollywood Reporter.

Tambor touches on the unfunny responsibility that comes with his starring role on the (you must watch if you haven't already) Transparent:

I'm a cisgender male actor assaying this role, so it's a great privilege and a huge responsibility that even in the third season just keeps tapping at me... My motto is do it right. It weighs on me. It really weighs on me ... I'm having these conversations in life, people are coming up to me, and I remember a gentleman coming up to me on the plane, and he was all Zegna'd and cufflinked and coiffed and shoed and everything like that and he [wagged his finger at me], and I went, “Here it comes, here it comes.” ... He put his hand in mine and he said: “You. Thank you for introducing me to a subject I had no knowledge of.” And I went, “Well, there's the revolution.” And I've had the other conversation, where I say, “You can't say that word, you can't talk like that.”