Madonna paid tribute to her late friends, artist Keith Haring and designer Martin Burgoyne, on World AIDS Day — both men were felled by the disease.

She also reminded people of a 1991 Billboard ad she once placed, and the terrible toll AIDS had taken before and has taken since ...

Keith Haring is renowned for his humanizing of LGBTQ rights and AIDS visibility, which he accomplished with his of-the-people-style subway murals. His work is

so universally easy to understand and chic, it remains popular on T-shirts all over the mainstream today.

As Artsy.net reports, the sexual libertine did create some racy work ... and one of his most famous, dirtiest murals is tucked away in a john at NYC's LGBTQ Community Center:

When he painted the mural, Haring was fighting his own battle with AIDS; he’d been diagnosed just a year before, in 1988. During the late 1980s, he and his community not only faced the fear of death, but also disregard and antagonization from the Reagan administration, which simultaneously laid blame on the gay community and refused to put resources towards AIDS research.

Via Gay Star News: I love the work of Venezuelan artist Daniel Arzola, who left his home country in fear of his life.

His creations are simple, joyous and rainbow-bright. They also contain written messages, 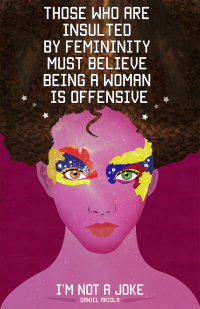 which is a passion of mine in art — I'm a Barbara Kruger whore, and used to include written words in my own work back when I was an artist.

He chalks up some of his success to none other than Madonna, who noticed an image from his I'm Not a Joke series and Instagrammed it. As reported by Gay Star News:

To his shock, in October 2013, Madonna saw one of the images and tweeted about it, saying ‘this art is no joke i love this @Arzola_d.’

That one Tweet changed Arzola’s life. In the course of just a few days, he received media inquiries from all over the world and dozens of requests for interviews.

However, that spotlight bought him to the attention of Venezuelan authorities. He says he began to receive threats. Mindful of his previous experiences, Arzola decided he had to leave.

‘I always say Madonna changed my life. When she shared my work on Twitter, people started asking for interviews with me. One of them was RNW (Radio Netherlands Worldwide) in Amsterdam – and they helped me get out of Venezuela and go to the Netherlands.’

I love his work. His work is love. 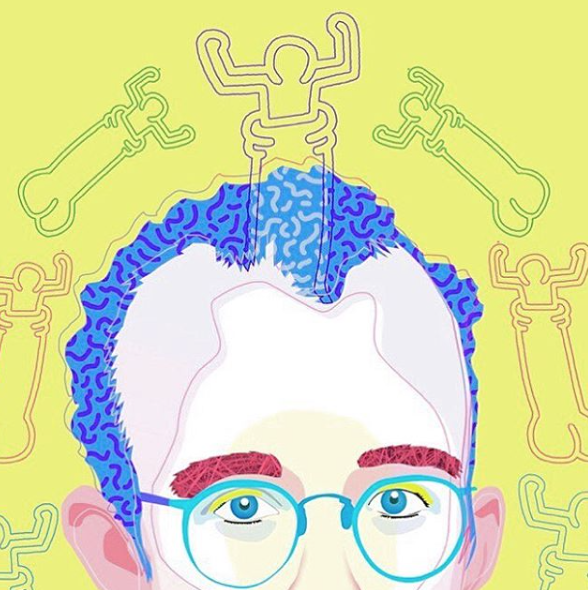 What If Vito Russo Ran For President? Comments (0)

Fascinating trailer after the jump for Fathers, a proposed short that imagines a world without HIV in which gay men were not decimated in the '80s, and in which we have not only a gay president but gay elders like Keith Haring, 59; Rock Hudson, 91; and Freddie Mercury, 70.

Leo Herrera, Mexican gay artist/advocate announced his latest work “Fathers,” a short film and exhibit slated for release in 2017 by kicking off fundraising efforts with the launch of the trailer for the film.

The 2-minute trailer brings awareness to World AIDS Day, gives the history of AIDS, pays tribute to many famous artists/activists and gives the world a taste of a film that Herrera hopes to fund through community support via tax deductible donations, with a portion of the proceeds supporting the GLBT Historical Society.

“What if Vito Russo ran for President? What if Mapplethorpe got into a Twitter feud with a Kardashian? What would David Wojnarowicz do about the gay executions in the Middle East? With Fathers, these are the questions I will explore with integrity, humor and history,” explained Herrera. “The tools we now have to combat HIV will give us the privilege of keeping our queer artists, but the injustices of AIDS should always live in our collective memory and more importantly in our imagination. It's the only way that we can find creative cures to the damage it caused to our culture and harness the power it gave our community to join against political forces that threatened our lives, now more than ever.”

The final project will be a “faux” documentary that Herrera describes as “HBO’s Looking meets Man in High Castle meets Beyonce’s Lemonade.” It will be produced along a team of collaborators, historians from the GLBT Historical Society, survivors, friends, lovers and family of the men featured. It will be filmed in San Francisco, New Orleans and New York. To research the political storylines for Fathers, Herrera worked on a New York art collective with Act-Up legend Avram Finkelstein (of Silence=Death campaign), and then as a campaign manager to successfully elect an LGBT activist to public office in San Francisco.

Keep reading for the trailer, and donate here ...

NY Times seemingly has a pattern of false Hillary-bashing stories.

Chris Hemsworth was too big for his giant cock.

“If art is a religion, then Keith Haring is a god.”

Does Ohio have a serial killer on the loose?

Let's play a game of hide-your-pussy.

Sounds like an incredibly promising advance in the push for an HIV vaccine. 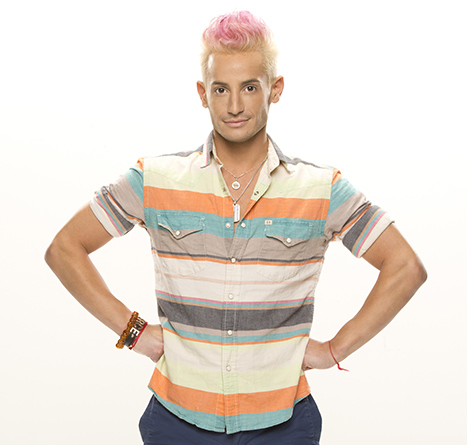 Big Brother cast flips out upon learning Frankie is semi-famous.

Church cancels funeral because the deceased was gay. (No, really!)

Inspired by God, man follows church-goer into parking lot, calls him a faggot.

Unsurprisingly, Donald Trump has no idea what he's talkin' about.

Haring/Madonna/Basquiat/Warhol, all mixed up together.