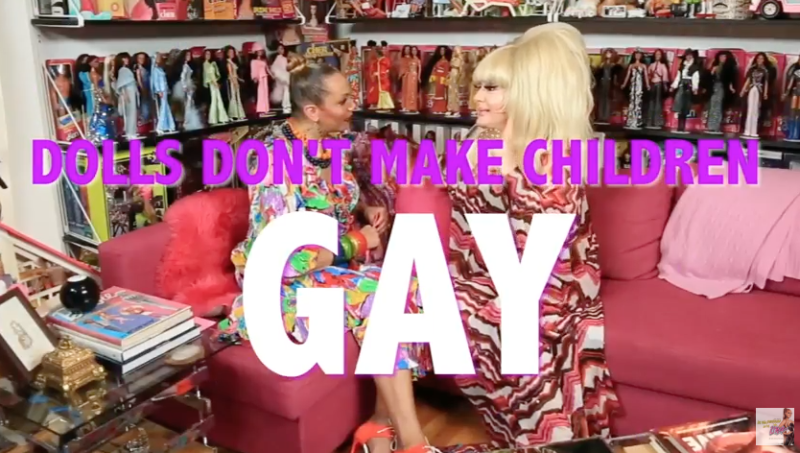 (Video still via In the Dollhouse with Lina)

“Patient Zero for Gay Rights” Lady Bunny makes a very colorful appearance on In the Dollhouse with Lina, talking about the genesis of her character, her first experiences with dolls, why she hopes Donald Trump will grab her pussy and the changing NYC scene.

Keep watching — it's riveting and she doesn't bash Hillary ...

Need To Know: Stand-OUT Beauties + ORANGE You Glad It's Back? + Supremely Confident + Moon Over His Lammy + MORE! Comments (0)

Orange Is the New Black gets early release for good behavior.

Lucky us, Kylie Jenner is prepping an album.

Lil' Kim has a new reality show. It looks like a Big Mess. 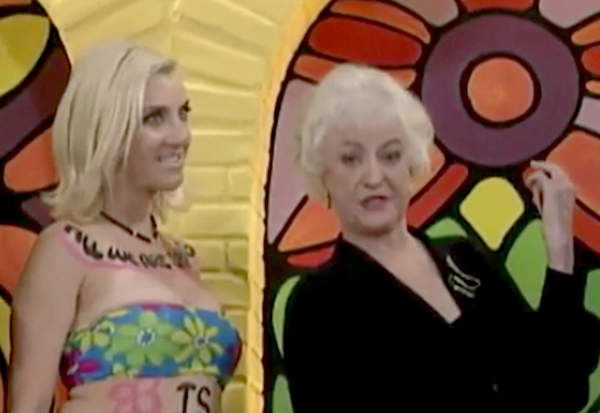 Bunny Or Die: An Interview With The Original HOT MESS Comments (0) 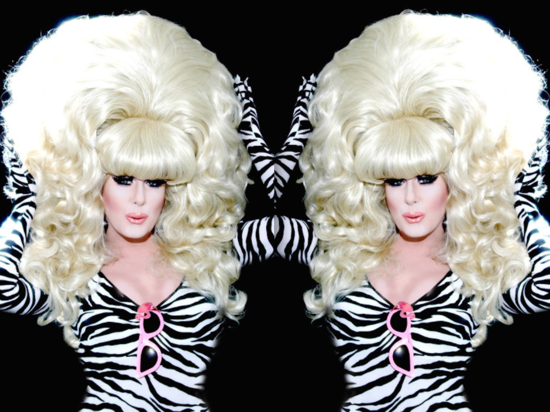 Bunny hops to it every Friday @ Hot Mess
If you're ever in New York, you'd be a damn fool not to check out the wildly popular Hot Mess Drag Revue, a raucous event hosted every Friday at 42West (formerly XL). Hostessed by glamorous Milan, RuPaul's Drag Race star Bianca Del Rio and drag legend Lady Bunny, this "adults-only interactive performance" has been exploding heads for two years now, pulling laughs right out of its patrons' asses...almost literally.
I was honored to interview Bunny about the drag show that Michael Musto has dubbed the best in NYC... You've gotta hand it to them

Please let me know if you ID anyone in these photos so I can credit them. Please don't take any images unless you credit them to me. Thanks and enjoy! More coverage here. 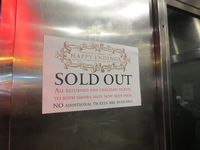 It was that time of year again—another  Broadway Bares fleshfest to benefit Broadway Cares/Equity Fights AIDS—and we were late. My buddy Jason and I walked up to the Roseland around 10:15PM ahead of the midnight show, and the line had already wrapped around onto Broadway. I figured everything would work out, and yet I also swore that 2013 would be my year to see both the 9:30PM and midnight shows to double up on photos and videos.

We'd been to the show many times before. In fact, you can flash back to those times here, here, here and here.

A sign posted before the show reminded us that photography was disrespectful to the participants, yet their excitement at being asked to pose told a different story. Why look amazing and wear an outlandish outfit if you're not going to let people document you for posterity? 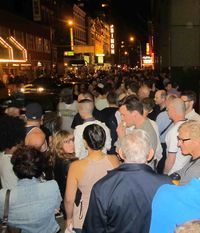 In line we were joking with friends and came up with a parody that Jackie Beat needs to do—"Christian Fister" set to "Sister Christian", all about a holier-than-thou Bible-thumper who's secretly a pig bottom. These are the kinds of things that get said while waiting to see 200+ dudes and chicks in the almost-buff. That and the remark that Elena Roger is so hated in Evita thaf if she were to do Broadway Bares the crowd would root for HIV. Don't get made at me—I liked the production! (P.S. More seriously, why couldn't Ricky Martin have done Bares this year?) 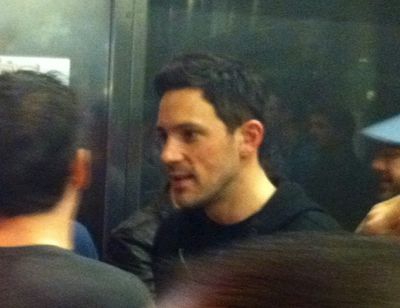 My pal Greg exited the first show and promptly told us of seeing Christian Borle (formerly married to Sutton Foster, a piece of trivia that bears repeating at every opportunity), Steve Kazee and Will Chase (all pictured above) entering the midnight show together as VIPs, but mostly we were scoping out the rather hot crowd. We'd just done Folsom Street East earlier in the day (100s of photos coming soon) and it can be hard to turn off being turned on. 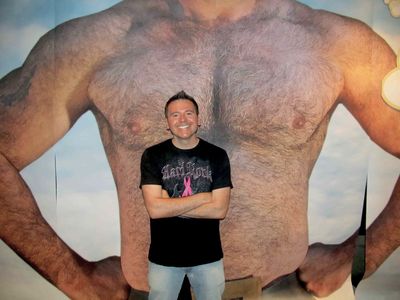 Hirsute is back! No stopping me when love handles come back in.

Inside, we dashed to the central of three stages and I glaciered my way from one body away to being right at the stage. It seemed to me to be an ideal spot, though there is an argument to be made against being too close—I wound up shooting straight up at some of the performers, which worked out well in cases where we're talking about a lead performer in a kilt. 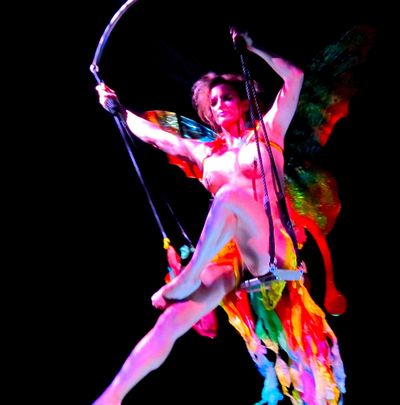 Tinkerbelle of the ball 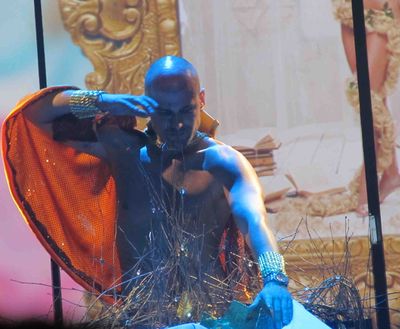 Before the show, which was themed to fairy tales, two lovely ladies fluttered overhead like gigantic Tinkerbells as sexy boys made the rounds selling memorabilia but giving everything else away in their skimpy outfits. There was a childlike sense of wonder in the air as well as the rather more grown up scent of balls. One had to be careful not to slip in the pools of Pavlovian drool once the lights went down signaling the main event was about to unfold.

The opening, "Happy Endings",  was one of the most spectacular I can remember, a light-hearted romp starring superfit Kyle Dean Massey (those jean shorts were so lucky) as The (Gay) Boy and GCB's Miriam Shor as his Fairy Godmother. "Well, I used to be a good Christian bitch," she announced. "Now—I'm just a bitch." 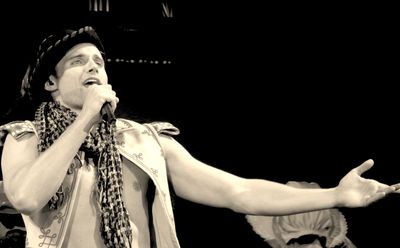 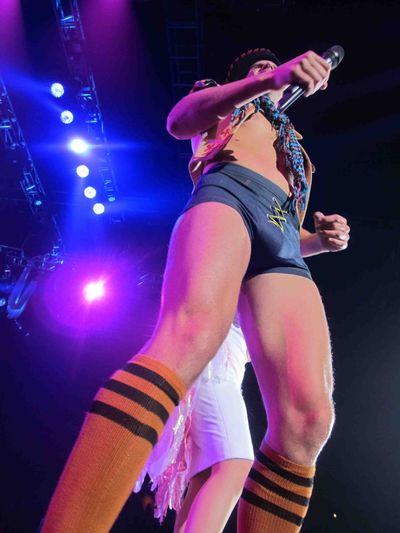 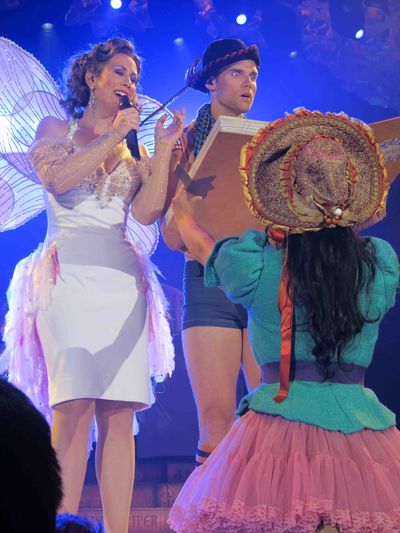 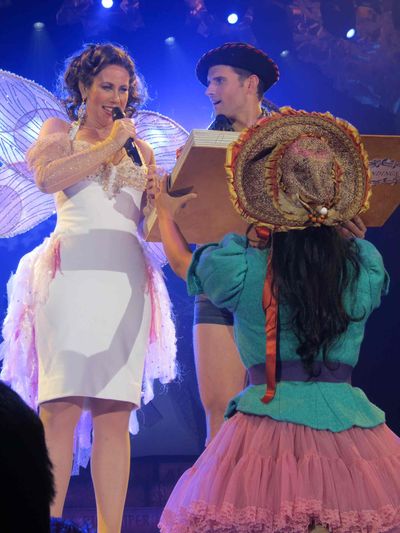 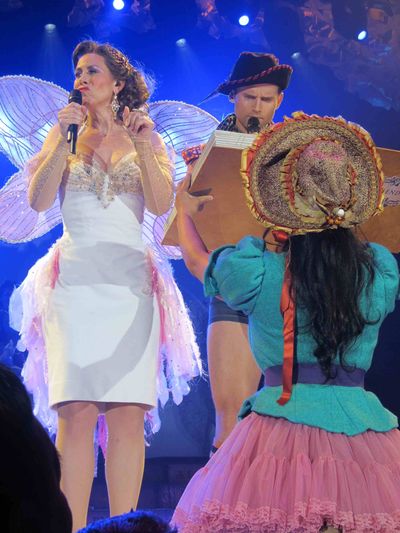 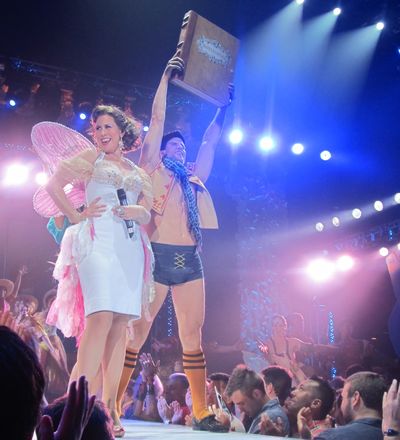 Kyle & Miriam were a Shor thing

But a well-intentioned bitch, and one who promised to help him find his own happy ending via a magical song she performed with backing by her Goddamnettes (Holly Davis, Chelsea Morgan Stock and Dan'Yelle Williamson)—it was consistently hysterical and bawdy. 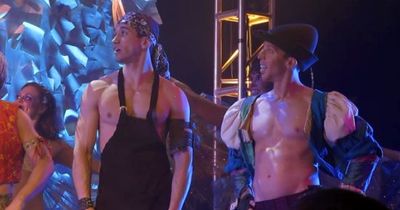 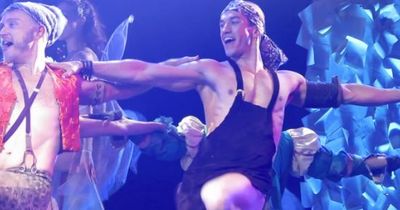 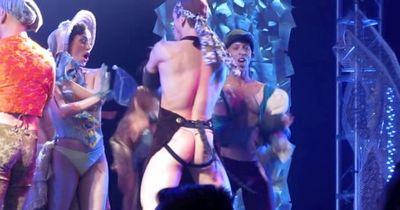 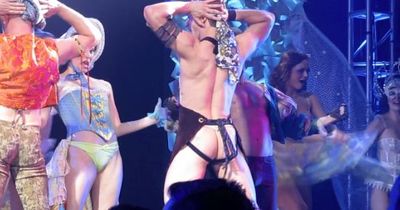 How can you not like a song that seamlessly segues into a limerick containing the word "cunty"?