ABOVE: Two of AJ's other queens.

BELOW: Keep reading for Lev Parnas throwing Trump under the bus, model behavior and more ...

ABOVE: Orlando Bloom is now at the age where he is Bryan Cranston when he takes a selfie from a low angle — and I am good with that.

Madonna, Andy Cohen & More Honored At GLAAD MEDIA AWARDS; Queen Of Pop Urges Everyone To Give Back, But Never Give Up Comments (0) 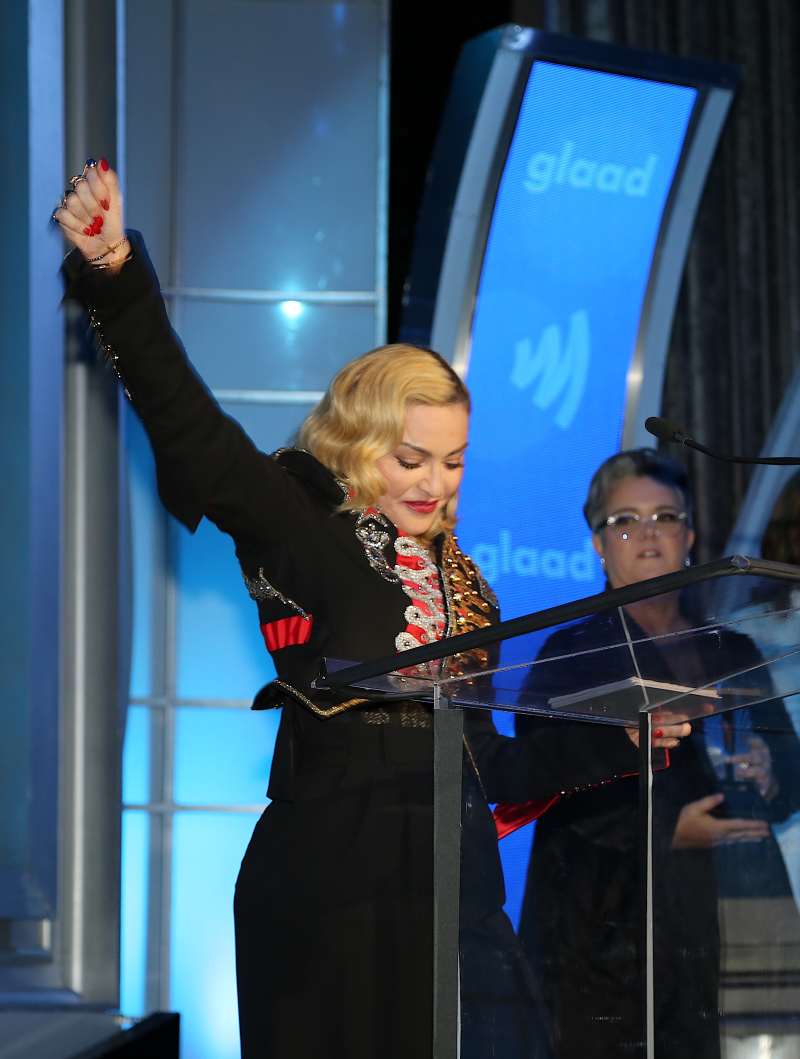 I bought my ticket for the 30th GLAAD Media Awards upon learning that Madonna would be honored there as a tireless Advocate for Change, a much-needed reboot of our appreciation for all she's done for LGBTQ people over the years.

I always cover the carpet, but figured she would not walk — and was right — so wanted to be sure I had a nice spot inside. 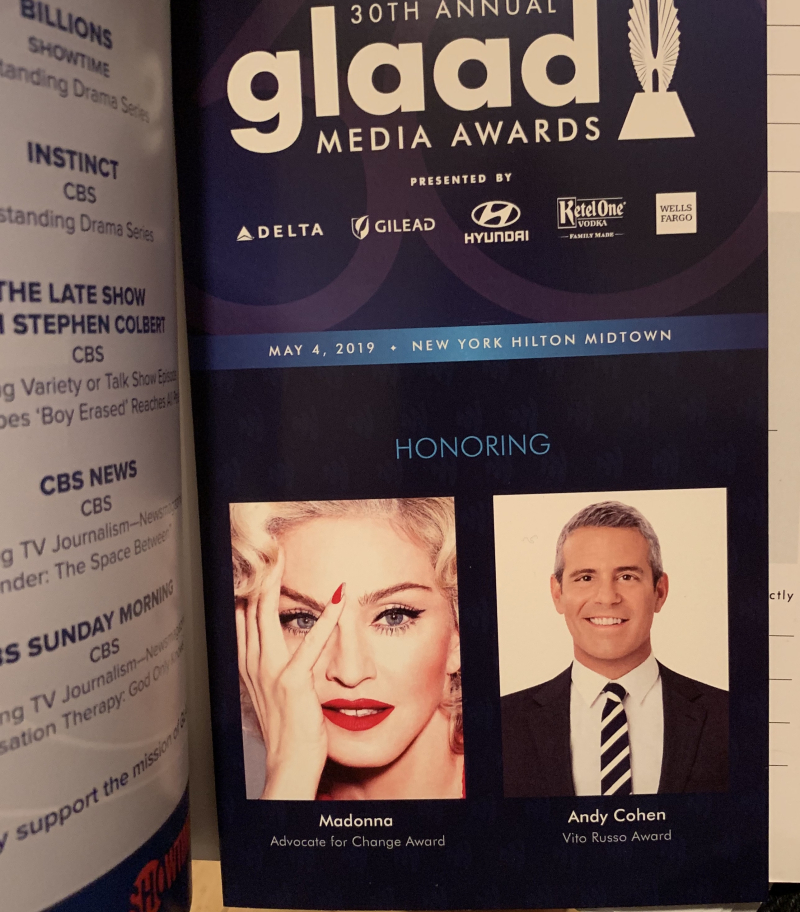 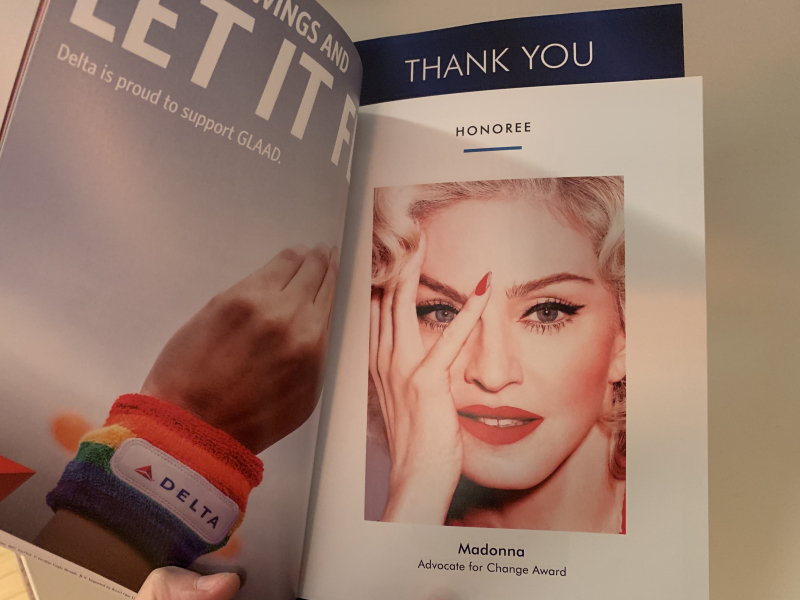 Getting with the programs

In the meantime, sadly, one of my dogs has been caught in a life-or-death health battle, so I thought I'd have to pass up the awards. As it turned out, he was in good hands Saturday, so I was able to take a breath, 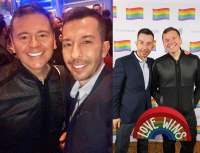 Pictured with my longtime buddy Lav ->

I did the carpet with my old friend Peter Dee, who manned the Q&A part while I filmed. (It's Boy Culture, not Dad Culture.) I wore my familiar CK jacket but accessorized with a vintage Madonna purse to hold my video cam.

The carpet's always fun — you're stressed out that you don't deserve to be next to major news orgs, then overhear that they'd accidentally been recording their interviews on slow-mo, or that someone will 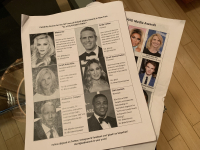 hog too much time with the best gets, leaving you with the dregs, then find out the ones you really want have no problem circling back to you anyway.

My own snafu — my video sometimes records with all the audio pitched to one side, not stereo. And I can't figure it out. So watch our supercut of snippets from Shangela (she tackles MAYOchella), Gus Kenworthy (got to say hello to his boyf Matt Wilkas), May Hong of Tales of the City, the Pose cast, Trace Lysette and Alexandra Billings of Transparent, Yuval David (Madam Secretary), Jonathan Van Ness, Sonja Morgan, Adam Rippon, Benito Skinner and more ... but do so with one ear:

With the carpet behind me, I dashed inside to find I was seated at a great table, where I met the owners of the Stonewall Inn. (We also had a Jennifer Coolidge caricature at the table who was apparently a Trumper, as she loudly complained about a very pregnant Chelsea Clinton's passionate speech about tolerance. 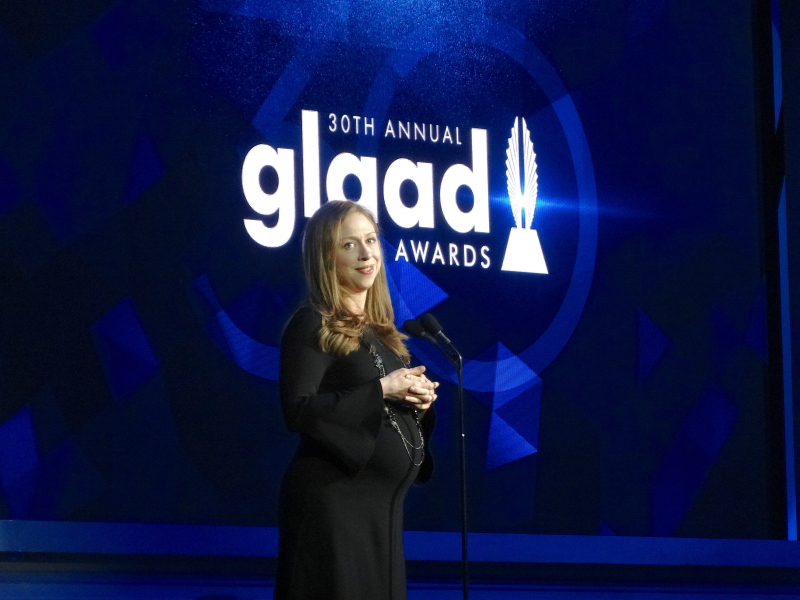 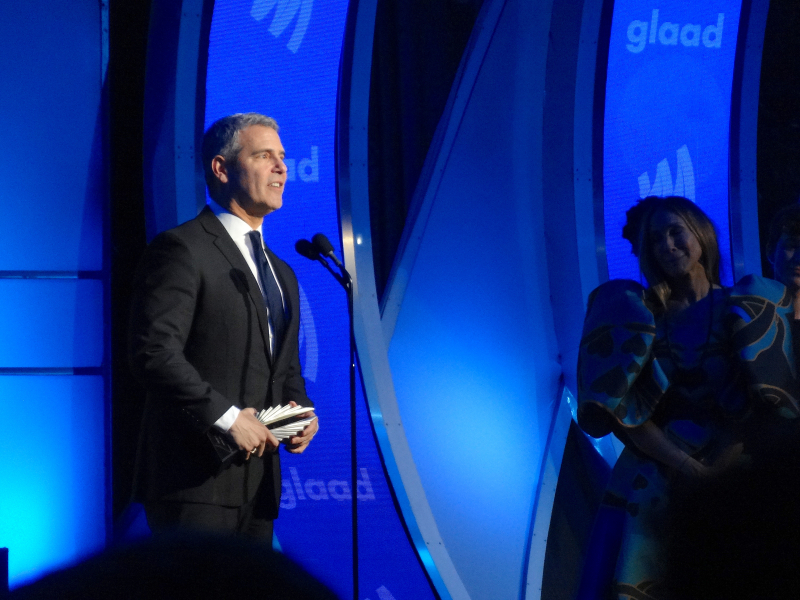 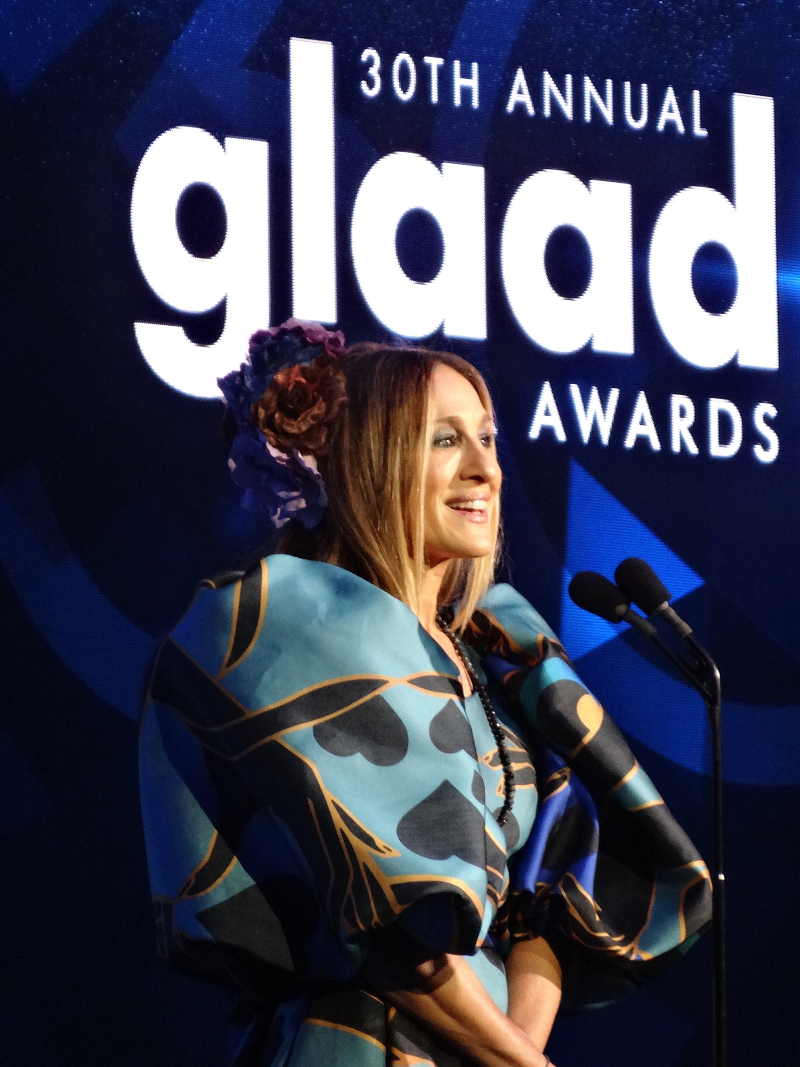 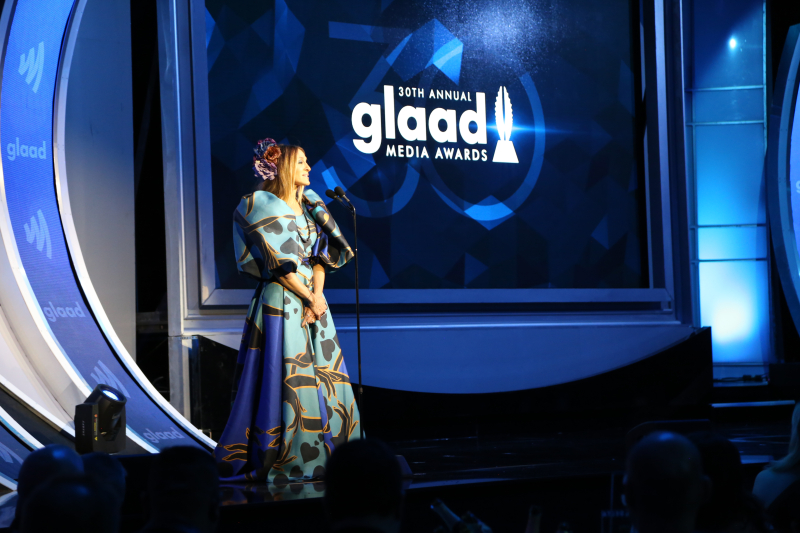 The dress was exquisitely, appropriately over-the-top-and-beyond ...

The show was one of GLAAD's best, with participation from the Pose cast, Rachel Brosnahan, and a hilarious presentation by Sarah Jessica Parker of the Vito Russo Award to Andy Cohen, who she teased for his younger wild ways. Shangela was a most capable hostess. One could even say she had the mostess. 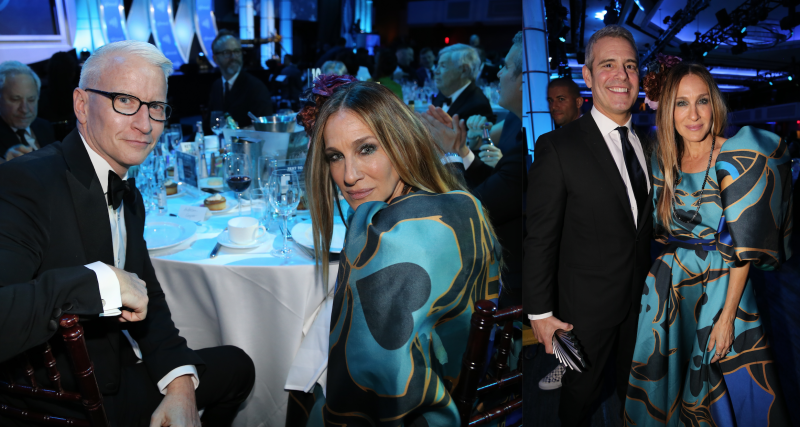 I was thrilled with my SJP shots

When Madonna strolled into the banquet room about 25 minutes before her presentation and took a seat, shielding her eyes with red sunglasses, I did not hesitate. I was the first photographer to approach and politely ask for a shot. She turned her head and said, “Nope, nope, nope.” Asked and answered! 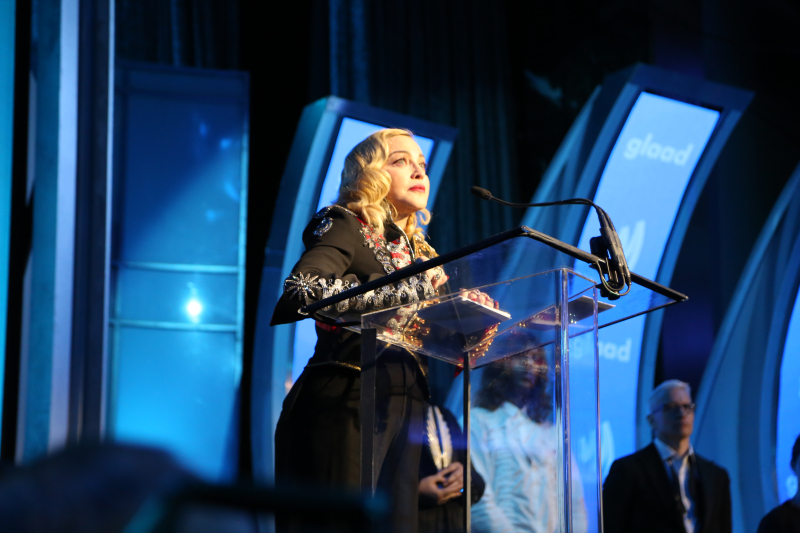 Still, I was able to park by the stage, so I got excellent close-ups when she was affectionately lampooned by Shangela (in a cone bra) and celebrated by Anderson Cooper, Rosie O'Donnell and queer rapper Mykki Blanco. Taking the stage to the strains of her new empowerment anthem “I Rise,” Madonna gave a lovely, funny, bittersweet speech, in which she thanked Christopher Flynn, Keith Haring and her best friend Martin Burgoyne for helping to form her values, remembering through some tears the plague years, when she went to St. Vincent's and embraced dying men in their beds to give them humanity. 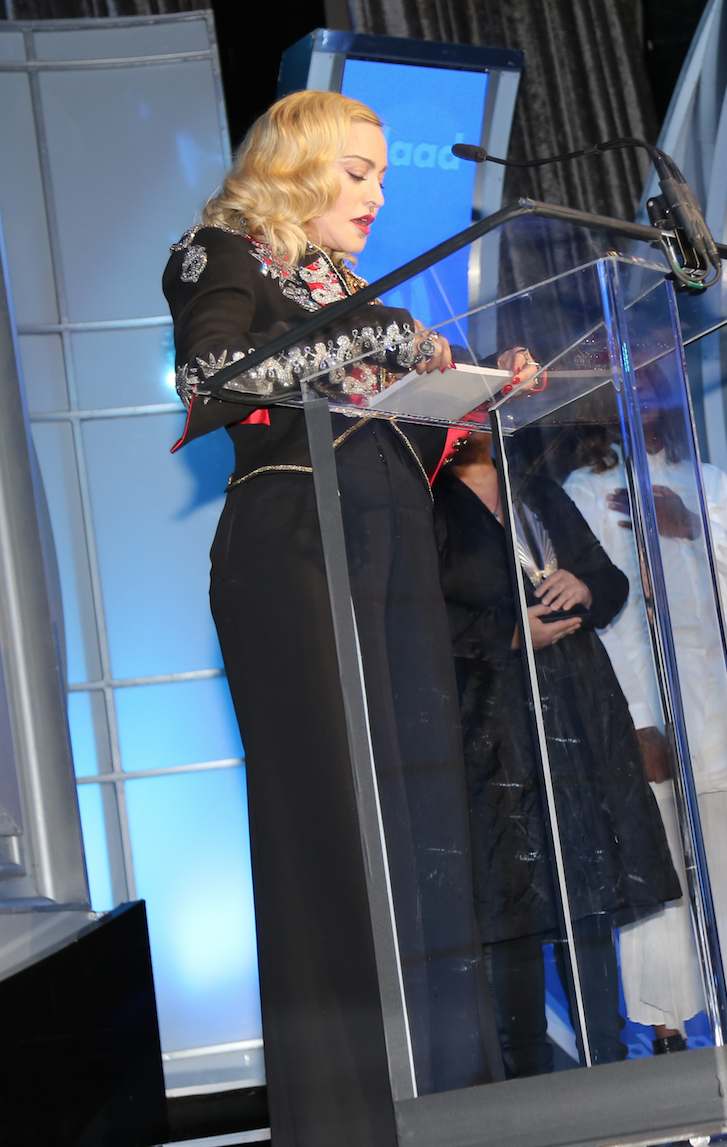 She spoke of her refusal to turn her back on marginalized people, promising to never let her LGBTQ fans down. 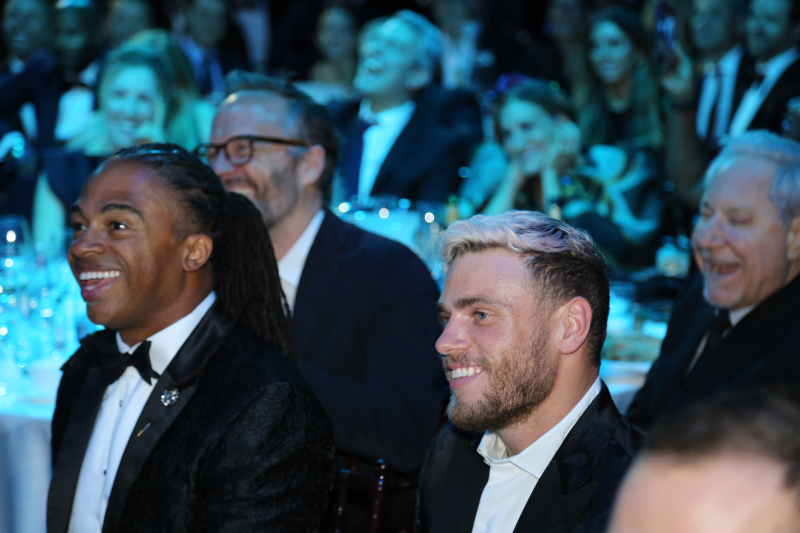 She was most emotional when talking about how her commitment to fighting AIDS led her to champion Malawi, from which she adopted four of her six kids. 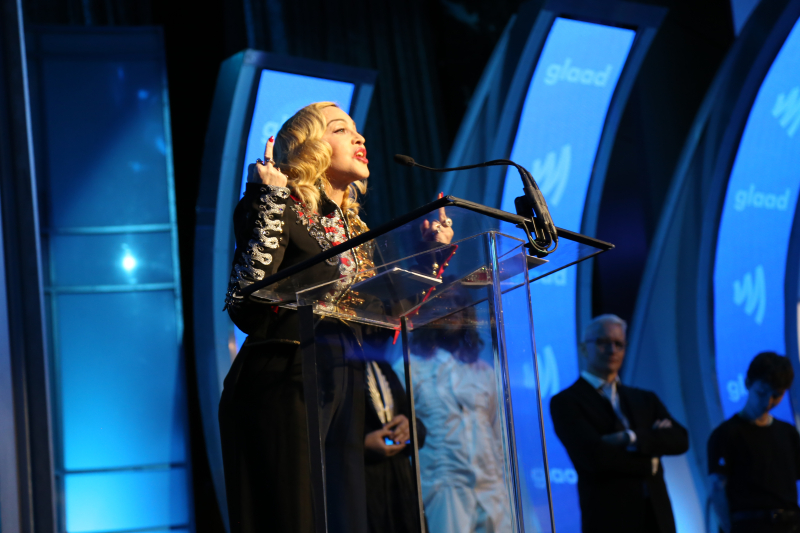 For comedy, Madonna recalled making Truth or Dare and having had no idea it would inspire men to come out as gay, let alone suck off so many Evian bottles.

Best of all, Madonna delivered a rousing reminder that we need to be who we are, whether people like it or not. She raised two middle fingers as she made this evergreen pronouncement, which came minutes after she'd pledged $25,000 to GLAAD during an auction run by celebrity benefit auctioneer Erin Ward that evening.

Madonna's gratitude to gay men in particular (no mention of her gay, estranged bro Christopher Ciccone) was palpable, her wit was in good order and she was, as ever, unready to back down from anyone or anything. 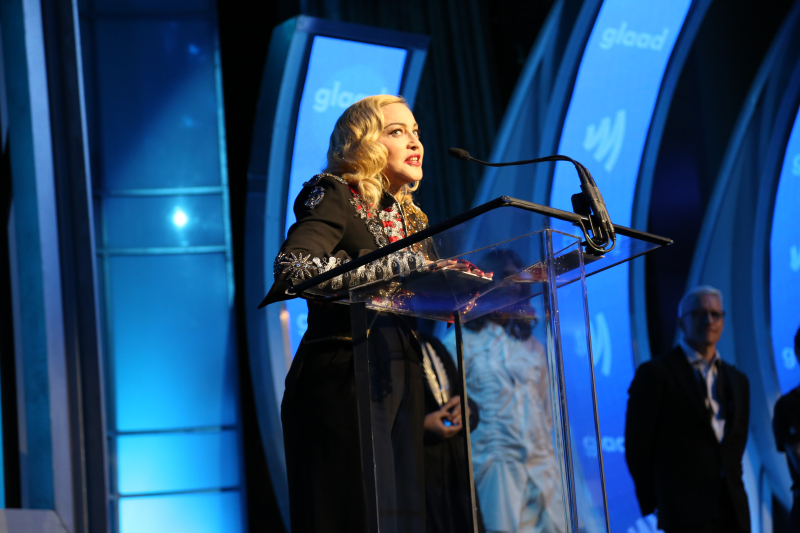 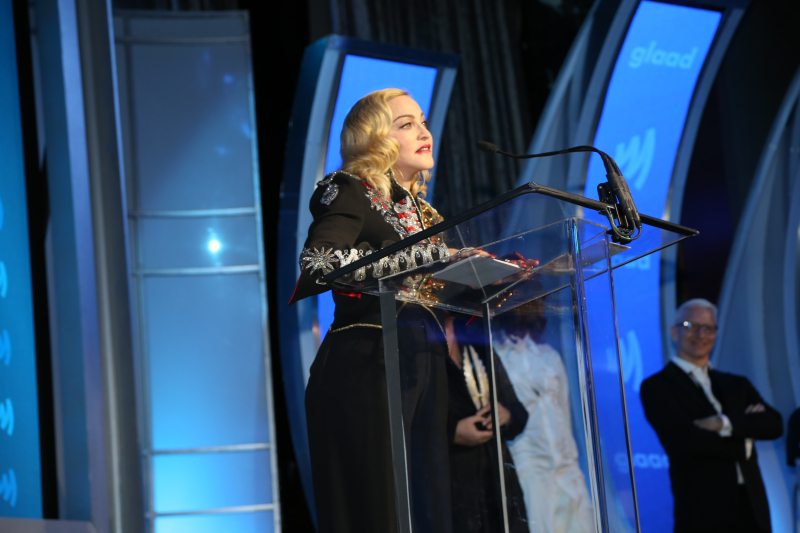 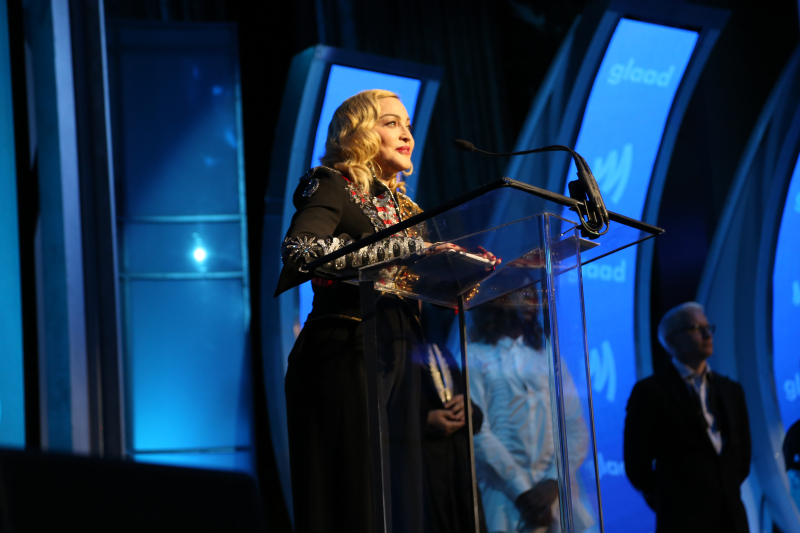 I also loved her use of a James Baldwin quote about how we don't own anything, but are mere shepherds of our talents — and we owe it to everyone to give back. 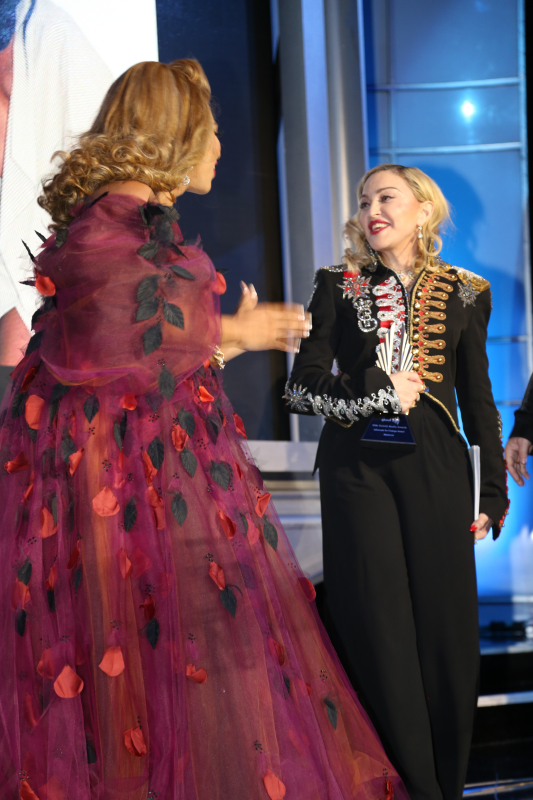 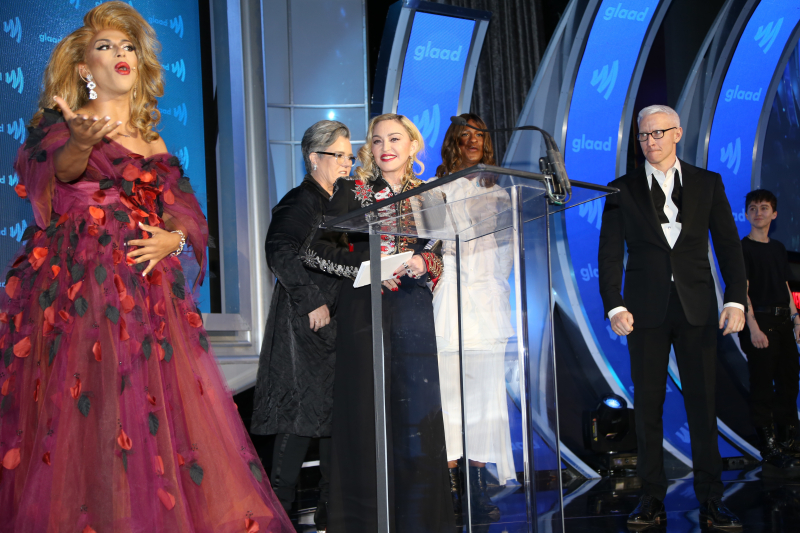 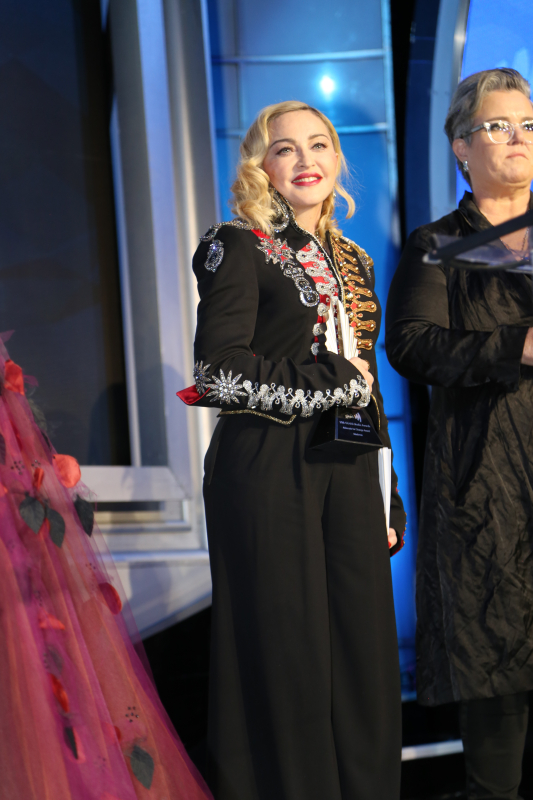 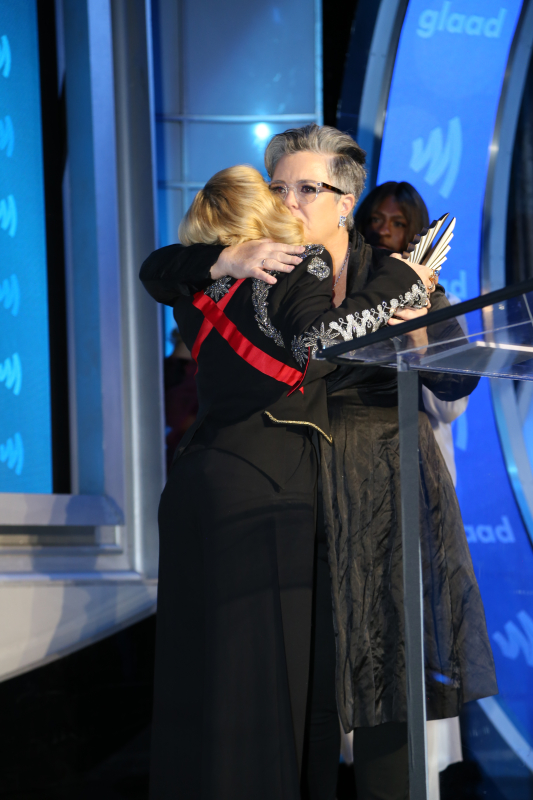 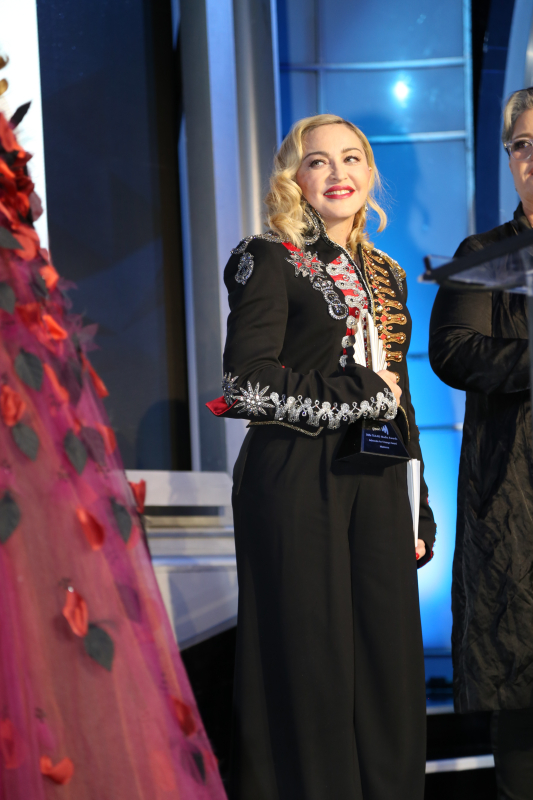 After that, she sneaked back through the stage and vanished, hand-in-hand with Rosie O'Donnell, but everyone else stayed and after-partied. She had, after all, told us in parting that Madame X is a freedom fighter, and a freedom fighter's work is never done.

Check out a chunk of Madonna's speech here:

ABOVE: Father and son!