President Trump threw hats to supporters at his rally in Duluth, Minnesota on Wednesday night, a day before he tested positive for COVID-19 https://t.co/h2lMQSiv6O pic.twitter.com/ZIVxg1CVEL

Trump throwing hats to supporters in Duluth, Minnesota, is a perfect representation of his super spreader presidency — including the delusional buffoons cueing up to “catch” anything he has to offer. 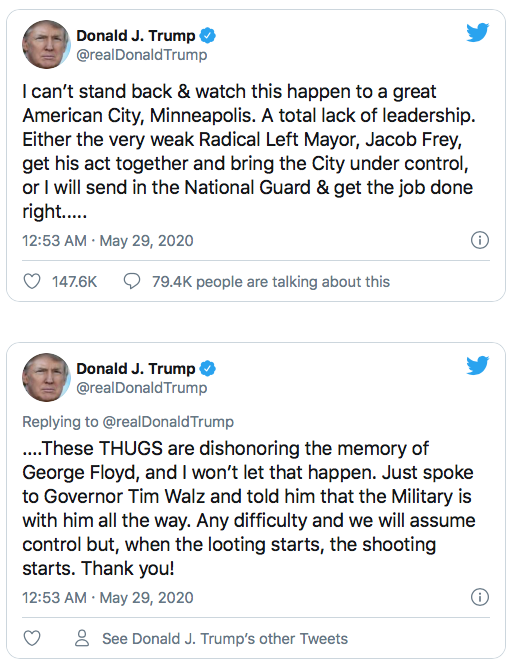 It's not a good idea to go to sleep anymore in the U.S. — you never know if you're going to wake up to the same country. And we haven't.

WATCH: In response to President Trump's tweet, Minnesota AG @keithellison says “calling people thugs & calling on people to get shot stems from the same sort of attitude that resulted in the death of George Floyd." pic.twitter.com/URSdc8KXej

Calling people thugs is part of why this is all happening.

Unrest in Minnesota over the 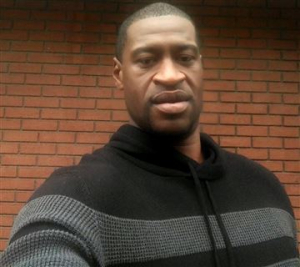 in-broad-daylight murder of George Floyd has inspired Trump to tweet that the people reacting to systemic racism and oppression are the THUGS, and to promise armed military intervention — and more state-sanctioned murders.

How can anyone think looting and unrest are the problem when black people are being targeted and willfully murdered for no reason at all, for non-violent offenses, and in Floyd's case, Hennepin County Attorney Michael Freeman has already telegraphed the ending to the story, saying:

My job in the end is to prove he violated a criminal statute. And there is other evidence that does not support a criminal charge. We need to wade through all of that evidence and come to a meaningful decision and we are doing that to the best of our ability.

He later said he misspoke about other evidence. Too late.

CNN's Omar Jimenez, a man of color, and his crew were — outrageously — arrested by Minnesota state police for covering the rioting in the city. An American reporter has been arrested by police. This is what happens in a dictatorship. There can be no doubt that there is a connection between the fact that it was CNN's staff being arrested and Trump's continual braying that CNN is “fake news” and “the enemy of the people.” This is a breath away from Tiananmen Square.

The images out of Minneapolis right now are unbelievable. Thousands in the streets, a police precinct on fire, fireworks being fired into those flames. All while we wait on whether charges will be filed against the officers involved in the death of George Floyd. #GeorgeFloyd

CNN is calling for the immediate release of its employees:

A CNN reporter & his production team were arrested this morning in Minneapolis for doing their jobs, despite identifying themselves - a clear violation of their First Amendment rights. The authorities in Minnesota, incl. the Governor, must release the 3 CNN employees immediately.

Gov. Tim Walz, a Democrat, has reportedly apologized to CNN's Jeff Zucker, and is working to have the CNN crew released. The problem is that we are in an increasingly police-controlled state, regardless of who is at the top of the food chain. They're acting more and more on their own.

√ Derek Chauvin, the cop who murdered Floyd with a knee on his neck had been the subject of over a dozen police-conduct complaints — with no punishment. Chauvin, Thomas Lane, Tou Thao and J. Alexander Kueng were immediately fired after Floyd's death.

√ Floyd and his killer, Chauvin, both worked security for the same club, El Nuevo Rodeo on Lake Street in Minneapolis. Chauvin worked outside and Floyd and other security guards worked inside.

√ Thao brutally beat an unarmed, handcuffed man during an arrest six years ago.

√ The protests of Floyd's murder have spread across the U.S., and are threatening to snowball as prosecutors weakly have requested patience as the case is examined.

√ HUNDREDS of cops are protecting ... the home of murderer Derek Chauvin.

√ Armed rednecks are out there in Minneapolis protecting — what else? — the stores. The stores.

ABOVE: Julian Morris — all wet.

BELOW: Keep reading for the spreading Bern, hot selfies, a kid asks Buttigieg for coming-out advice and more  ...