ABOVE: He's so vein.

BELOW: Keep reading for a Sense8 actor coming out, Tina Turner on B'way and more ...

There are funny ways to lampoon and shame Trump and his villainous cronies (and voters) for the unconscionable separation of parents and children at our borders, like the brilliant satire above.

However, it is a serious issue. Little kids — even babies — are being pried from their parents, who only seek a better life. This is Trump's policy. He keeps trying to say it isn't his policy, but it is — he is enforcing it, and he can end it any time. Rachel Maddow knows this, and watching her break down is all you need to know about where her heart is:

Rachel Maddow chokes up and cries on air as she struggles to deliver news that migrant babies and toddlers have been sent to "tender age" shelters pic.twitter.com/O6crm8cvyR

Here is your choice:

Above: You're gonna love all Tom Hardy's workout vids.

Below: Nancy Pelosi is putting America to werk, Omarosa might get subpoaened, busy sweaters, government shut-down news, RIP Bradford and YOU MUST watch this Rachel Maddow segment ...

Did Trump — who would be the client! — leak his own return?

Love Rachel Maddow, but when she teased that she had gotten a hold of Donald Trump's tax returns, people expected a lot more than what she actually had.

Maddow, via Trump biographer/investigative journalist David Cay Johnston, had two pages, front and back, of Trump's 2005 1040 form, which revealed he paid $38,435,451 in taxes on income of more than $150 million. Sounds like a lot, but it represented only a 4% payment rather than over 30% it would normally be; The Daily Beast reports the Trumps paid about $31 million in the AMT, a tax Trump wants eliminated.

In this case, because while the returns do raise questions, those questions are above the pay grade of Joe Q. Public, who will think that the guy made a lotta money, paid a lotta taxes and is being persecuted by the publishing of the returns.

In fact, the White House statement on Maddow's action plays the sympathy card: 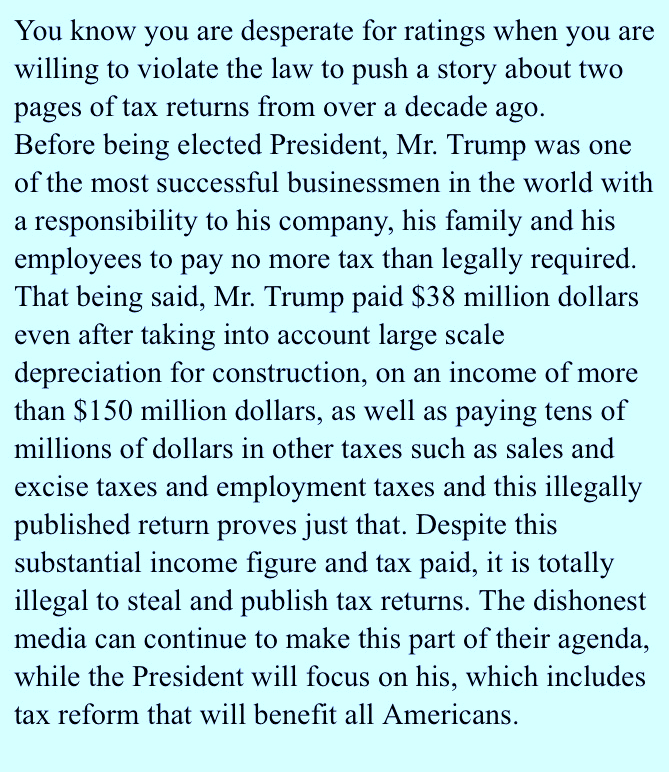 This has Trump written all over it. Why? Because he doesn't want to talk about Russia and wants to push ahead on denying health care to tens of millions of Americans, many of whom foolishly voted for him and probably therefore deserve to die unaided, but dirty leftists would rather they didn't.

Watch her summary of the returns after the jump ...

Outsports: We like to superficially sexualize wrestling, but here's a high school wrestler who legit used his sport to overcome obstacles in the way of coming out as gay.

Wonkette: WATCH THIS! Rachel Maddow wonders what Russia is doing right now to continue to undermine American democracy — by destroying the State Department:

Mashable: Head of the EPA denies that carbon dioxide is the main cause of global warming. We are all going to die. But sooner than expected, I mean.

Facebook, Island of Gozo: Malta's natural wonder the Azure Window, immortalized on Game of Thrones, has collapsed into the sea after thousands of years:

#RIP to the #AzureWindow
Was one of the best sights I've seen in my life #Neverforgotten #malta pic.twitter.com/UQMHnhmjmP