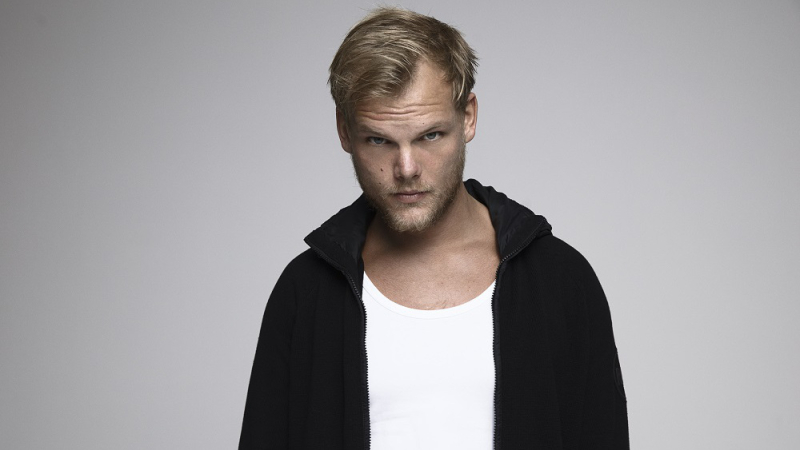 (Image via Piece of Magic) 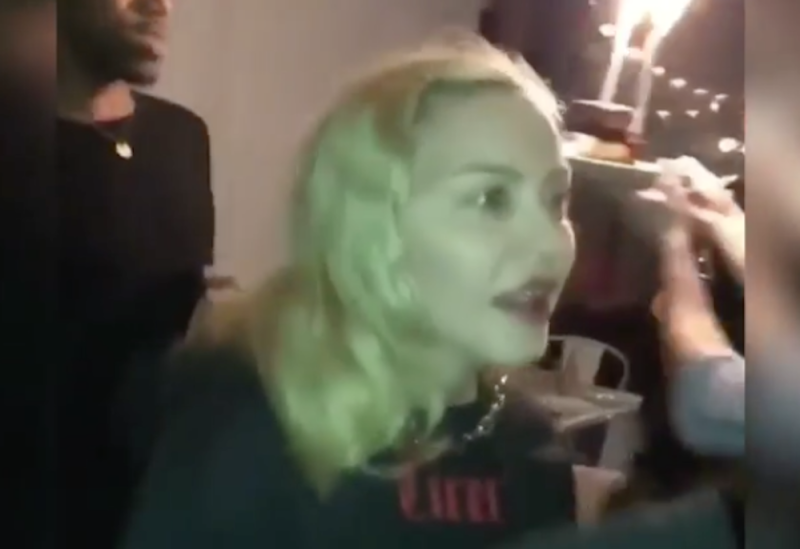 Madonna remembers her original “Everybody” chorography from 36 years ago ... and she proved it by breaking out a few of the moves at her MDNA Tour and Rebel Heart Tour dancer Loic Mabanza's NYC birthday party this week at Catch in NYC. 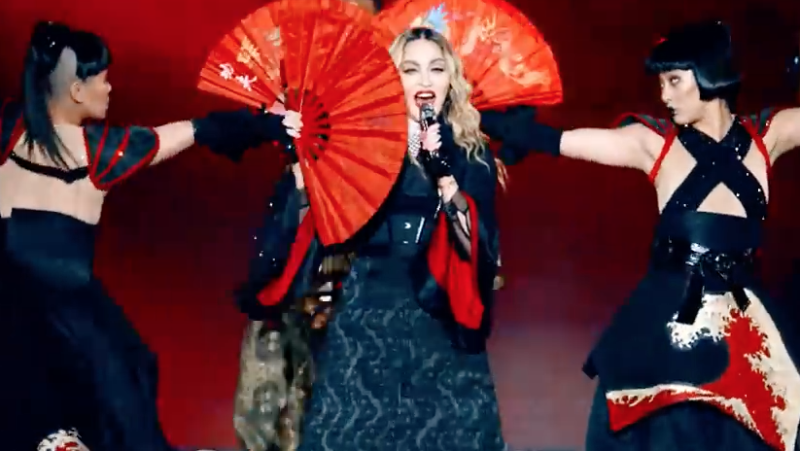 Madonna's (amazing) Rebel Heart Tour will be broadcast on Showtime tonight, ready or not.

Undress You Up Comments (0) 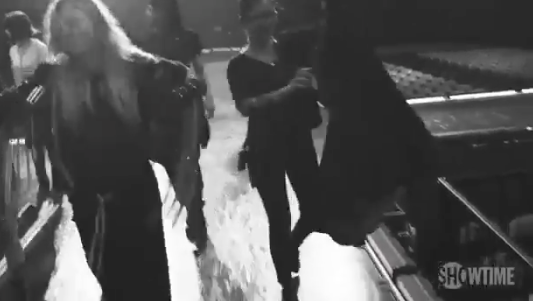 In a teaser for Showtime's December 9 airing of Madonna: Rebel Heart Tour, Madonna adorably sings to her (un-)dresser ...

Madonna: I KNOW THAT I CAN BE DIFFICULT AND DEMANDING AND PUSH YOU Comments (0) 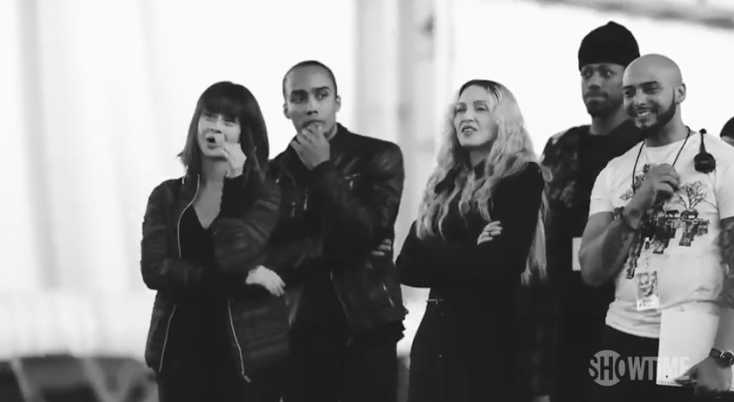 Showtime's December 9 airing of Madonna: Rebel Heart Tour gets a meaty trailer, throughout which we hear Madonna singing “Easy Ride” from her 2004 album American Life, performed live only at Tears of a Clown in Australia.

Keep reading to hear and see ...

Counting Down Till CARPOOL KARAOKE With Madonna Comments (0)

Madonna's With Her ... In Spirit!: Inside Her Washington Square Park Pop-Up Gig! Comments (0) 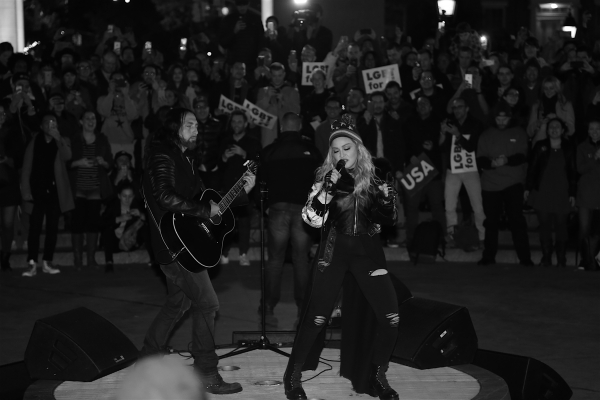 (All images can be maximized with a click; all by Matthew Rettenmund)

Madonna was stressin' me out with her secret, election-eve gig ... would it be in Philly? North Carolina? Michigan? Streamed live from her john? 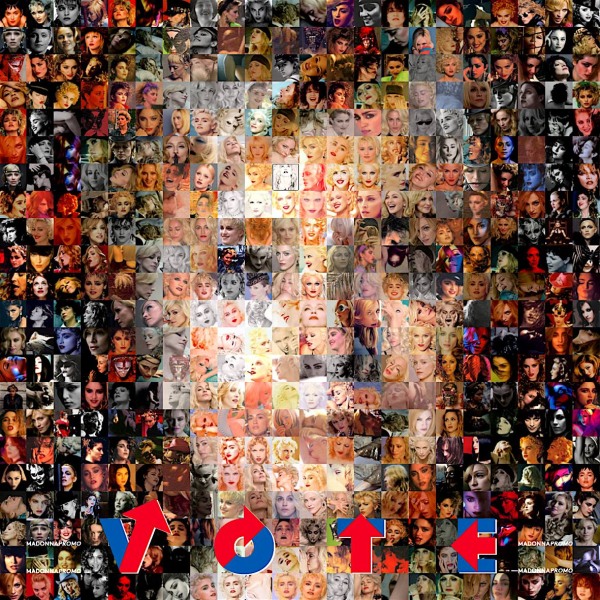 Turned out to be an impromptu, pop-up gig in Washington Square Park, which she broadly hinted at while I was en route and then confirmed shortly thereafter. The small window of time ensured only the craziest fans could hightail it over, ensuring a manageable but enthusiastic crowd. 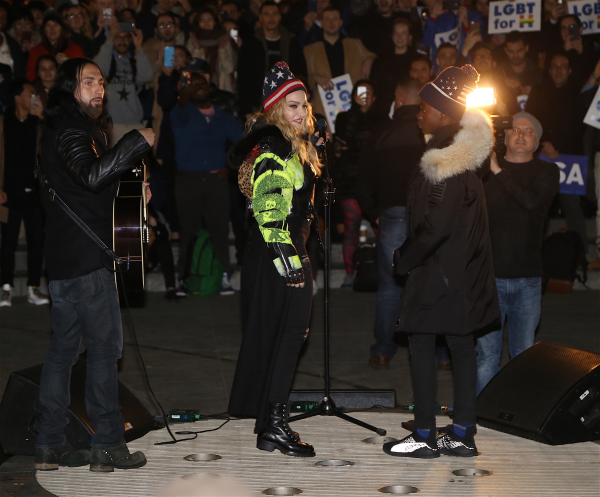 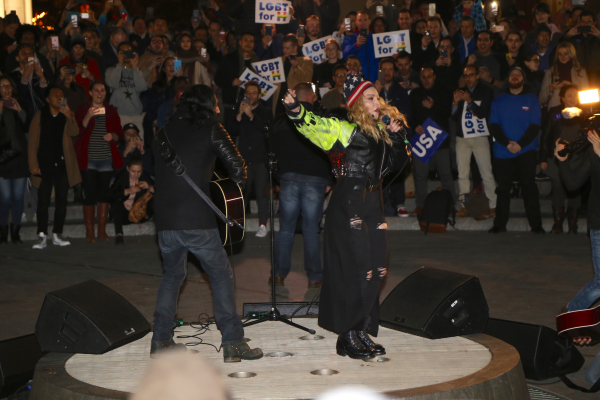 My buddies and I sat at the fountain, directly across from the arch. It seemed obvious she'd perform inside the (empty) fountain with her back to the arch for the best photos.

In no time flat, we realized she would make her exit and entrance RIGHT beside us, which she did after her SUV pulled up at 7:30 on the dot. 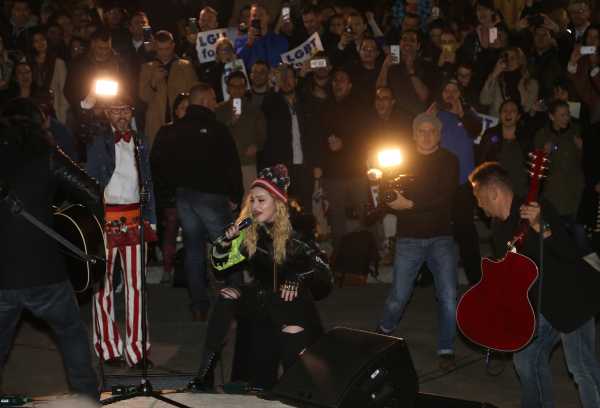 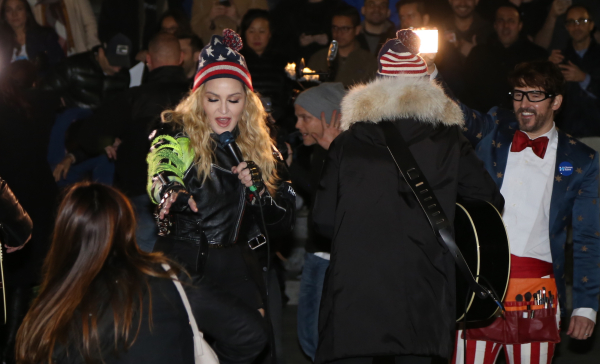 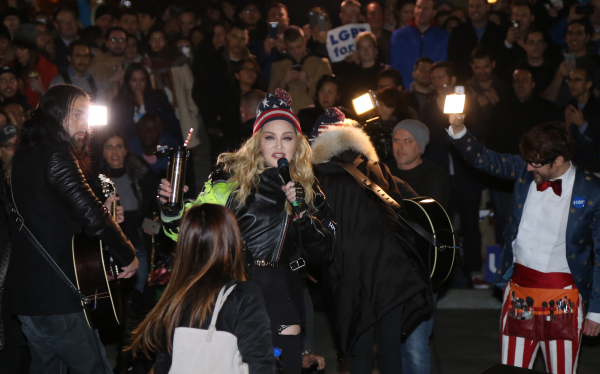 Madonna strolled in, surrounded by minders but quite accessible, wearing a stocking cap, long golden locks and an extremely colorful bomber. Had she been at Hillary's North Carolina rally, the Internet may have decided her look was an Illuminati salute; after all, Gaga was accused of dressing like a Nazi (when she was, in fact, wearing an original Michael Jackson jacket worn by the King of Pop to the George H. W. Bush White House). 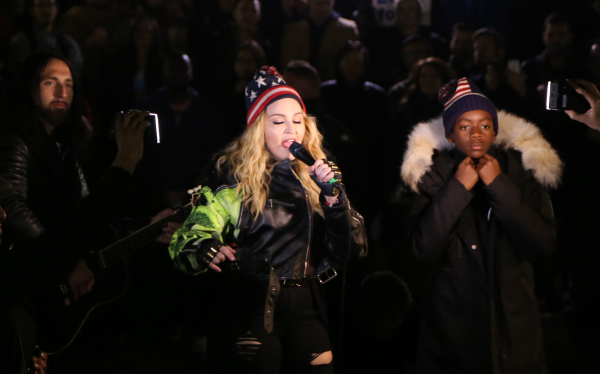 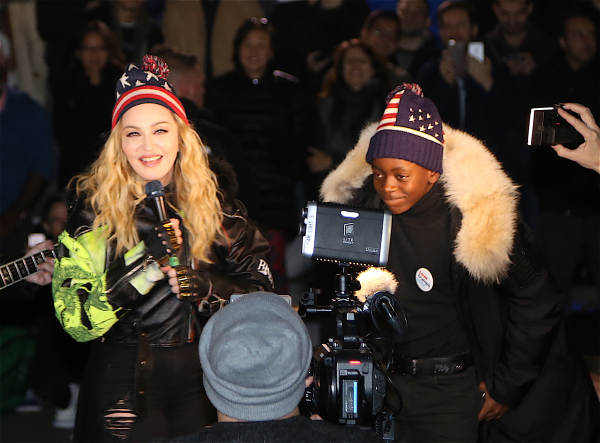 Madonna with her running mate, her talented kid David!

The set-up was 100% simple, and Madonna performed with her trusty guitarist Monte Pittman and her young son, David Banda, who strummed the guitar in parts.

Sadly, she spent most of the concert with her back to us. It was a theater-in-the-round set-up, but she only looked back at us a few times.

In good spirits, Madonna asked us to vote for Hillary Rodham Clinton and urged us to believe in the power of prayer before launching into an engaging and charmingly rough-around-the-edges set. I was that guy demanding that his friends give him credit because I had predicted the first three songs—from her entire catalogue—exactly: “Express Yourself,” “Don't Tell Me” and a cover of John Lennon's “Imagine.” Then, asking if we believed in the power of love, she seemed ready to dust off “Rescue Me,” but instead launched into “Like a Prayer.” She finished with a vocally amazing “If I Had a Hammer”/“Rebel Heart” mashup. 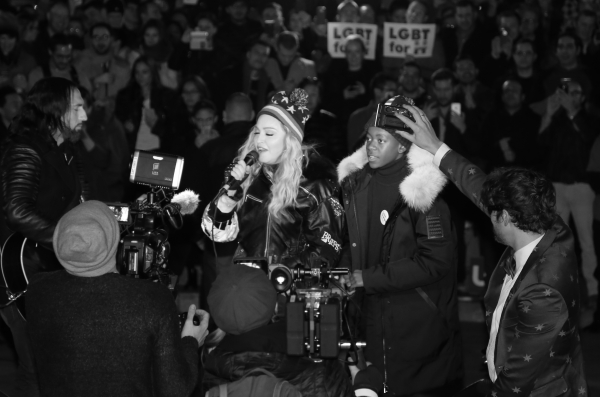 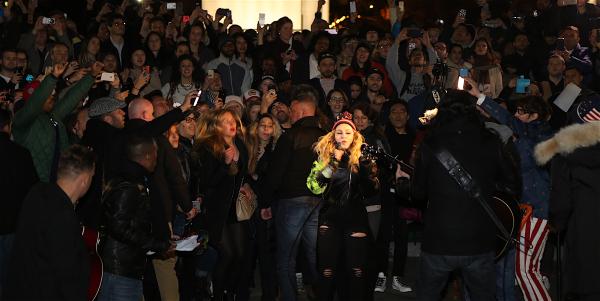 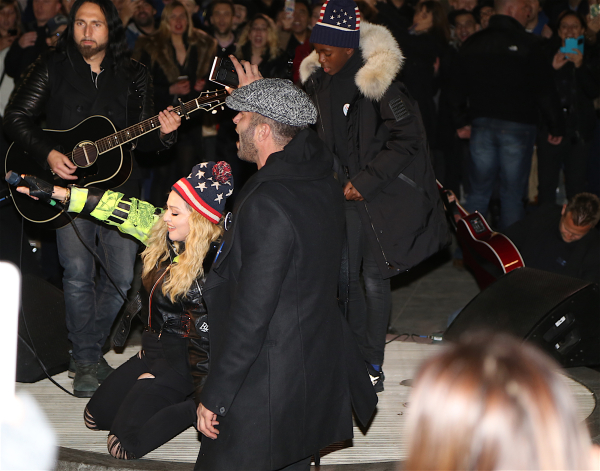 Hoping it's a celebration in a few hours!

The 25-minute performance was warm and cheerful, and all the fans kept their distance, showing great respect for her space.

Probably my favorite was Madonna needling Obama for never having invited her to the White House, and only meeting with her when he had one day left as president. 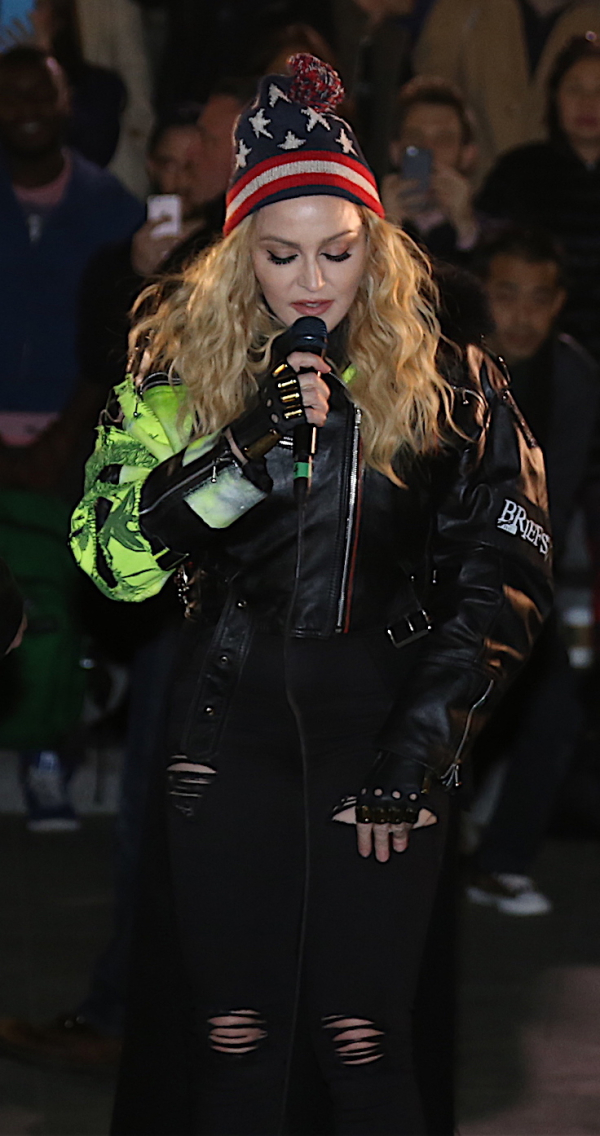 She's got the write-in stuff!

I didn't get the jaw-dropping photos I had hoped for—she was pretty  shy coming in and out—but did get some, which I'm sharing here. Enjoy. Wish I could have brought all of you along.