BELOW: Keep reading for the outing of Gaetz, Santos the failed pageant queen and more ...

Chaya Raichik, Bigot Behind Libs Of TikTok, Brands All LGBTQ People EVIL ... AND THEY WANT TO GROOM KIDS Comments (0) 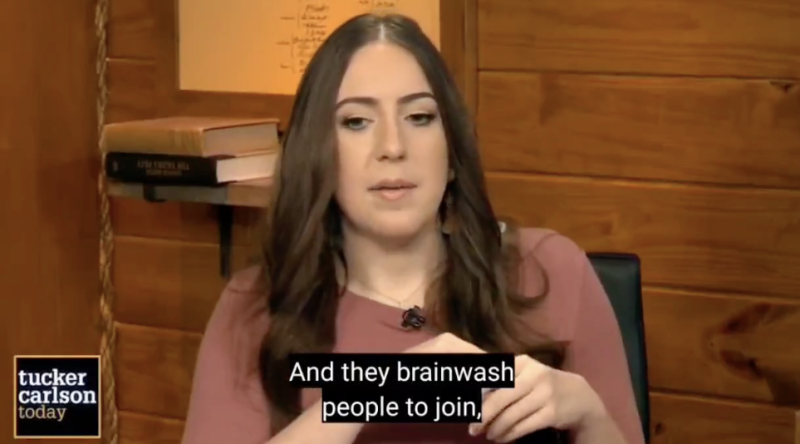 It's a face made for anonymous TikTok. (Image via video still)

VIA TWITTER: Chaya Raichik is the person behind Libs of TikTok, and she finally showed her face in a Tucker Carlson interview after whining that her aggressive work that has directly led to violence also led to her being exposed. (Revealing who is behind a seethingly bigoted social media account is not doxxing.)

You must listen to her. It is frightening. Long on Long Island and short on eloquence, it would be a mistake to blow her off. She is not a garden-variety homophobe or transphobe, she is not J.K. Rowling or Dave Chappelle. She describes the LGBTQ community as a “cult” that is “captivating” — “unlike anything we've ever seen” — that is “brainwashing” people. All of them. In the end, she says:

She is nervous here, but is remarkably direct in saying all queer people are evil. What is the next step if we are evil? To get rid of us, of course. And Tucker Carlson is right there with her. After she states all LGBTQ people are evil child molesters, Carlson's reaction is:

Chaya Raichik went on Tucker Carlson and said the "LGBTQ community has become this cult... It's extremely poisonous." She later says "They're just evil people, and they're out to groom kids. They're recruiting."

This is one of the most bigoted interviews I've ever heard. pic.twitter.com/0tVe9WONOH

ABOVE: It is, after all, the reason for the season.

BELOW: Keep reading for an all-growed-up hottie, Zelenskyy in the White House, a trans activist's suicide and more ...

ABOVE: Don't give him a shirt for his birthday.

BELOW: Keep reading for Kanye West and Elon Musk's spat, Madonna Sexes it up, David Archuleta left mid-concert by homophobic fans and more ...