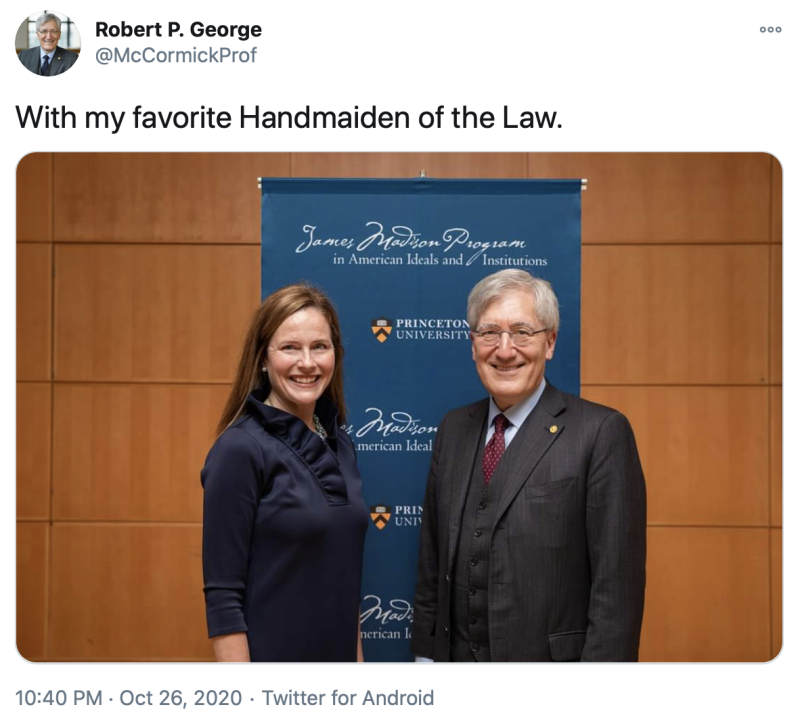 This is what you call gloating — an anti-marriage equality professor with his “handmaiden.” (Image via Twitter)

I've always understood that the Republicans were merely sticking with Trump to use him, and that there is no love lost between them in many cases. However, I used to be surprised they had not abandoned him sooner. Like, why not dump him early in 2020 and try to save their jobs? But now it's clear — the ideological ones knew that there was always a good chance of a third, generation-impacting SCOTUS seat. And now, they have it. Amy Coney Barrett was rammed through, was approved less than eight days before the national election, and that is that. She is wildly anti-reproductive freedom, anti-LGBTQ, anti-voting rights, anti-ACA, and we all know it. And she is about to show it.

Why Expanding the SCOTUS Is a Good Idea — HERE

Now, we are going to have to look very seriously at expanding the Supreme Court. It's not a snap-our-fingers prospect, but has been done and is both constitutional and only fair. We will also have our work cut out for us legislatively. If the Court invalidates same-sex marriages and eliminates the constitutional right to abortion, kicking it to the states is not good enough. We will have to fight on every level to preserve people's rights. Which sounds ... exhausting.

But let's remember: Anything can happen. (This goes both ways. Like, Thomas could retire now and they could get a fourth Trump justice by January. Or Trump could win, which is unlikely, and they could get a fourth, fifth and sixth. Or, on the other hand, Biden could win and Amy Coney Barrett or any other justice could drop dead; we simply do not know what the future brings.) Anything can happen, but the wind is at our backs in every other regard; let's make sure Biden/Harris, with the mandate I hope they will have in a week, will take full advantage of it.

Sen. Leahy: WE SHOULD NOT HAVE HAD A NOMINATION CEREMONY BEFORE JUSTICE GINSBURG WAS EVEN BURIED Comments (0) 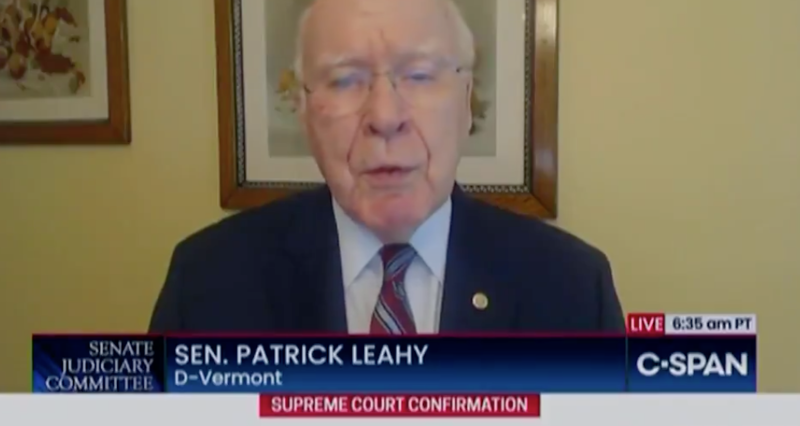 It is true that it is the responsibility of this committee to consider [RBG's] replacement on the Supreme Court, but this isn't the way we should do it. We should not have a nomination ceremony before justice Ginsburg was even buried.

Dems should keep hitting on this when the media helps Trump by pretending that Biden's refusal to rule out expanding the SCOTUS is a pearls-clutching thing:

ABOVE: I approved this message.

BELOW: Keep reading for a movie about a gay couple battling Alzheimer's, a fake scandal involving Hunter Biden and a real one involving Chad Wolf, the amazing words spoken at Ginsburg's service at the Capitol and more ...

... to vote out every GOPer currently in office? (GIF via GIPHY)

Via Huff Post: Mitt Romney wanted to remind us he's trash — an anti-abortion Mormon first and a Never Trumper second, he has announced he is only too happy to vote on a replacement for Ruth Bader Ginsburg before the election, rushing a confirmation in an election year.

I don't think this plays well for Republicans, strategically, but I am guessing the thinking is this: