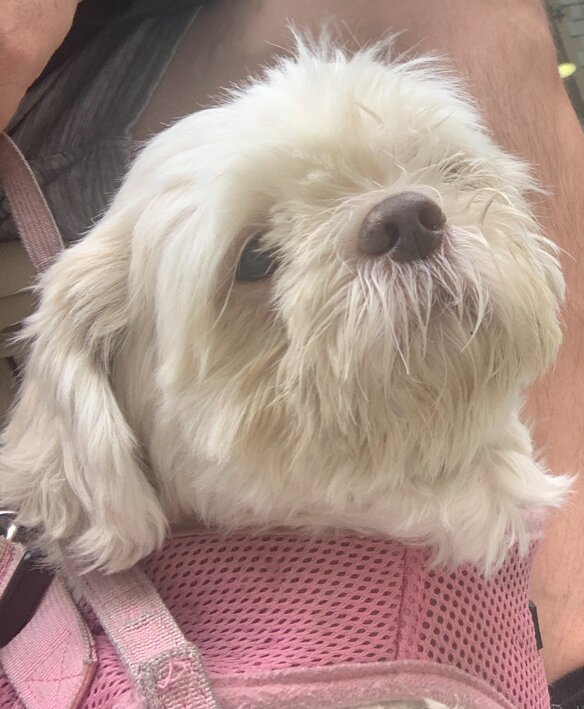 She looked this pretty, and yet was just a few minutes away from leaving me.

This is my last portrait of my lovely Shih Tzu Sash, who became ill yesterday and died in the afternoon quite suddenly, although not 100% unexpectedly. It was a great final day for her, with eating, a walk, playing and devoted petting time, all unplanned, and I think her last moments were very comfortable. Hug your animals today! I am busy doing that with her surviving brother, Hyphen.

Ends Of The World Comments (0) 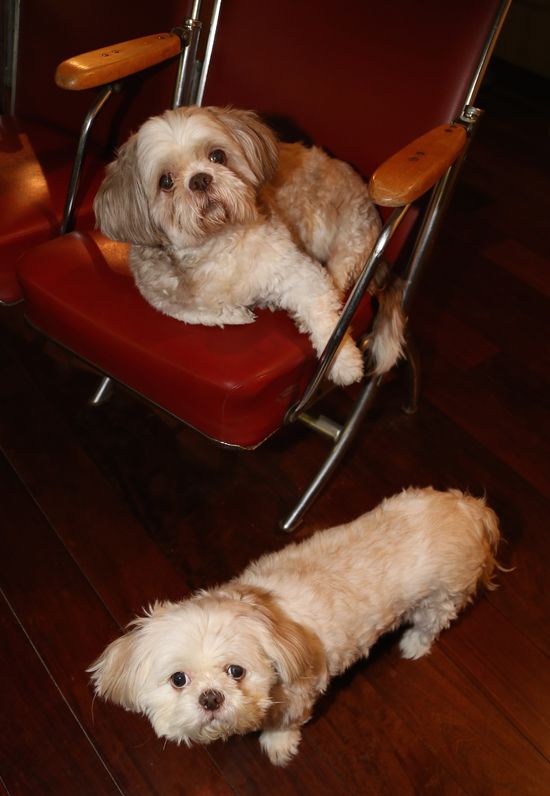 This week was my dogs' seventh birthday. Best decision I ever made.

It's So Hot In NYC, My Apartment Looks Like A Dog Crime-Scene Photo Comments (0) 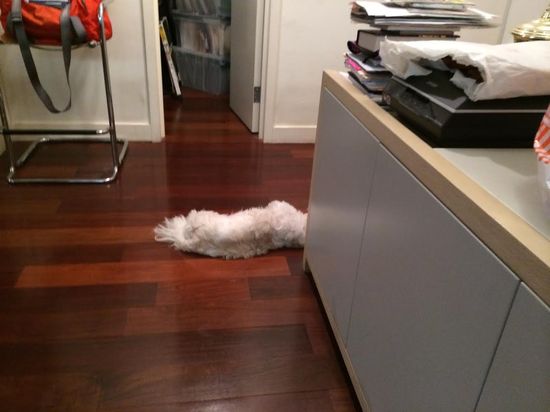 “Laura Mars”, eat your heart out! 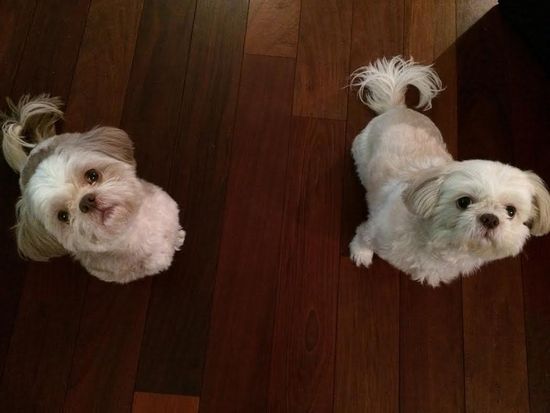 My babies are six years old today. Crazy. They were the picks of the litter. Well, they were the ones that were left and that we could take. I'd bet anything their brothers and sisters haven't had half as great a life as they have, but I hope they're happy and healthy. Hyphen (L) and Sash (R) were given oatmeal as their birthday treat. Impossibly, Sash (after only hearing it six times in her life) understands that "Happy birthday!" means good things are about to happen.

Get a dog and love it, if you can. Or a cat. Or another animal. They can be pains in the neck, but they're worth it. 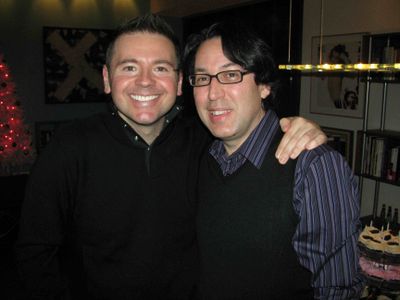 Thanks, José, and happy [cough-cough]th birthday to you, too!

Like a virus trying to invade a cell, "40" is closing in on me—it's official on the 25th, but I celebrated Saturday night with a "surprise" party thrown for me by my partner, José. I figured it out pretty much the moment after he hit "send" on the Evites. I'm bad about guessing things. I attribute my inability to be fooled to an early Christmas encounter with my mom, when I dared her to guess what I got her and she said, "Mmm...gloves?" She was right and I bawled my eyes out. The fact that she not only took a guess but tried hard to be right was not lost on me, so now I'm constantly trying to figure things out before I'm supposed to—finishing sentences out of characters' mouths as José tries to watch Desperate Housewives, theorizing whodunit when major crimes are announced and, of course, guessing that somebody, possibly somebody close to me, might be throwing me a surprise party for my 40th. 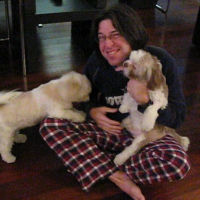 But to spoil José's surprise was not enough—I had to surprise him while doing it. Since his own birthday was coming up (today, in fact!), I arranged for his brother to appear on Friday for a short visit. That way, he'd have someone from his family to celebrate his birthday with him (and we'd have extra help, mwah-ha-ha). Carlos arrived at 1:30 a.m. due to a delayed flight, leading to a surprise/heart-attack when someone unexpected entered our house at that hour. The dogs fell passionately in love with him. 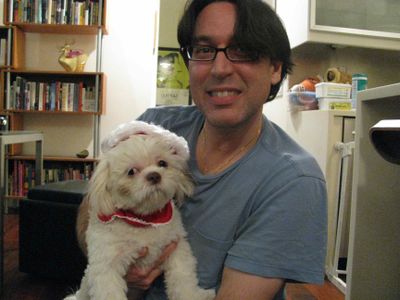 
The next day, the dogs fell for the "let's go for a walk" trick we'd previously used to get them over to daycare—they wound up surviving their 22.5-hour overnight stay, but we were sad not to have them around even if we knew damn well they would flip out and be over-stimulated at a birthday bash. 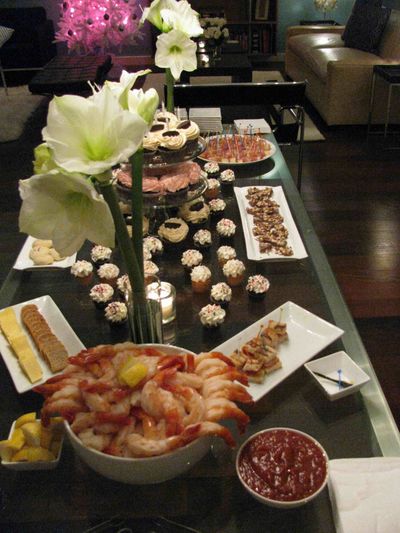 Almost all the food disappeared.


We used Laurence Craig Catering for part of the food (he's a pal and ex-neighbor), including (all minis) 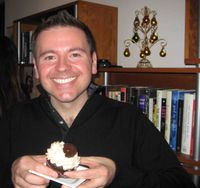 Reubens, Cuban sandwiches, pumpkin spring rolls, mac 'n' cheese soufflés, weiners and short rib sandwiches. All were delish, but we were worried we didn't have enough, so we supplemented with jumbo shrimp, curry puffs from Yum Yum (a favored take-out joint of mine), gouda wrapped in prosciutto, brie and crackers, grapes and nuts. The "cake" was made up of my favorite cupcakes (chocolate with a Reese's Peanut Butter Cup baked into each one, peanut butter frosting and another cup sticking out the top—from Eleni's at Chelsea Market) surrounded by other varieties (chocolate with pink frosting, mini-brownies with vanilla frosting, vanilla cupcakes with vanilla frosting). Then there was chocolate bark and José's famous holiday butter cookies. 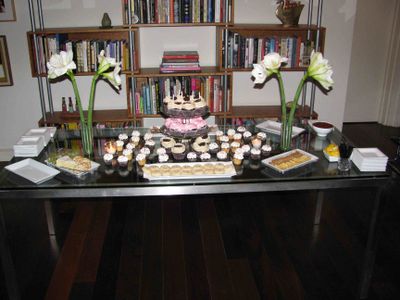 José was proud of his table. 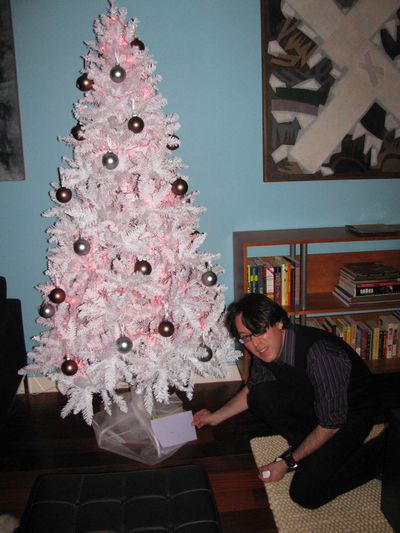 José gets nosy with his gift under the tree (which was radiant pink pre-flash). 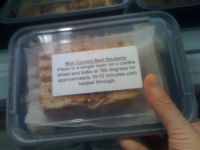 Our server was Caleb, who did a brilliant job of calming us the fuck down—we had no idea how to heat up so many dishes and serve them effectively, but he kept everything coming and going expertly. Our bartender was Brian, who was good-natured when one friend chastised him for refusing to (over-) serve him, only to follow that up lasciviously with, "Now give me a hug." Everybody seemed to drink vodka or water. And a lot of it. 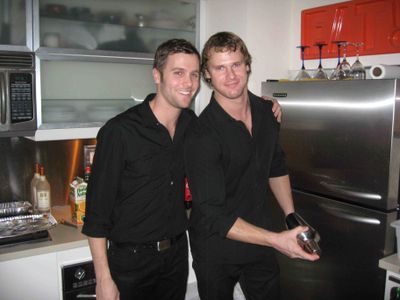 Our appetizing server with every drunk's favorite hunk.


I think the friends I've made are highly compatible—maybe too compatible!—since they all seemed to have a good time, even the ones meeting for the first time ever. I had some early arrivers (on purpose) who stayed late (on purpose), which is always a good sign that your party is cool and you don't smell. It was a bit heavy (on purpose) on writers and bloggers, and, of course, on Madonna Queens. 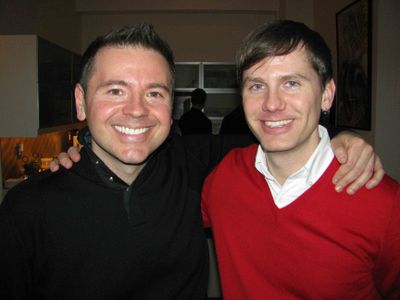 With my pal Jason. We met when he caught Madonna's Confessions Tour hat.


One thing I asked was for everyone to do a signed self-portrait in a little book so I'd have that as a record/registry of the evening. The results were alternately amusing and amazing; I'll reproduce some (without embarrassing anyone by releasing their names) at the end of this post. 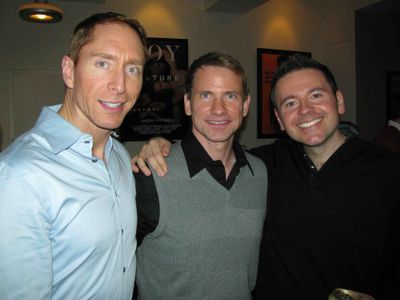 With Brian and Tom, who took a bus from Jersey for me = sainthood.


It was an exciting change from my surprise 30th, when we had a handful of patient friends sitting around my living room staring at each other, to have close to 30 guests actually enjoying themselves and staying glued to the place until after midnight. I had only a few last-minute no-shows, but that was balanced with some last-minute surprise additions. There is nothing worse than an underpopulated party. 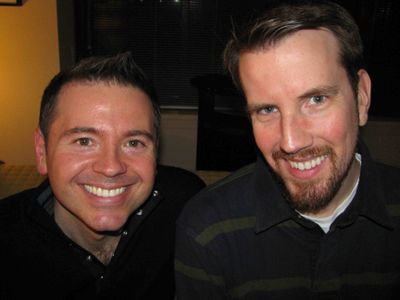 
I had "Happy Birthday" sung to me and got some nice presents and met some cool people and had a chance to finally chat with some others I've known forever but with whom I never seem to have time to connect. With Craig and Frank. Frank's Band Fags novel should be on your list. 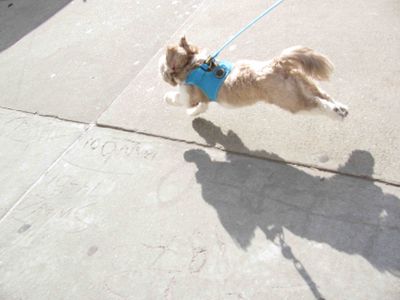 Hyphen runs home for the holidays.


In the morning, we ate cupcakes and dinered with Carlos, then went to fetch our eager puppies. They were ecstatic to see us and literally ran all the way home. For them, it did not matter if I were fat and 40 or 40 and fabulous or 40 period—as long as I was there on time. 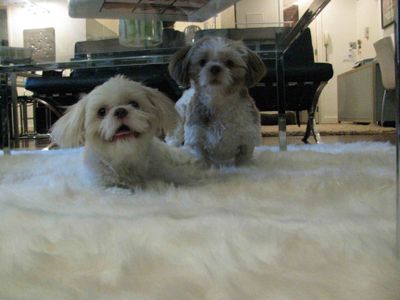 Sash (smiling) and Hyphen get re-acquainted with the rug.
After the jump, everybody's self-portraits..