By the way: A federal watchdog group wants to know if Mnuchin and Linton used a federal government plane just to view the eclipse. 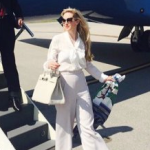 Louise Linton, Treasury Secretary Steve Mnuchin's boorish billboard of a wife, has — you guessed it! — apologized for her outrageously offensive Instagram post and reply to a critic.

She had bragged about an expensive day trip to Kentucky, tagged her luxe accoutrements and then shamed a woman for not being richer.

Now, she has finally addressed the kerfuffle, which made international headlines ...

Louise Linton, the trophy wife of Treasury Secretary (incredible that he is in this position considering his past as an economic leech) Steve Mnuchin, is incurring the wrath of woke Instagrammers after slamming a woman (ah, one of the little people!) for noting that the taxpayers were footing the bill for her day trip to Kentucky, on which she was decked out in luxury garb She even tagged her Hermès scarf!

Linton's response was a double-barreled defense of her status, she and her husband's contributions to the country and more ...