Fleshback: Who Is Andrew Stevens? Comments (0) 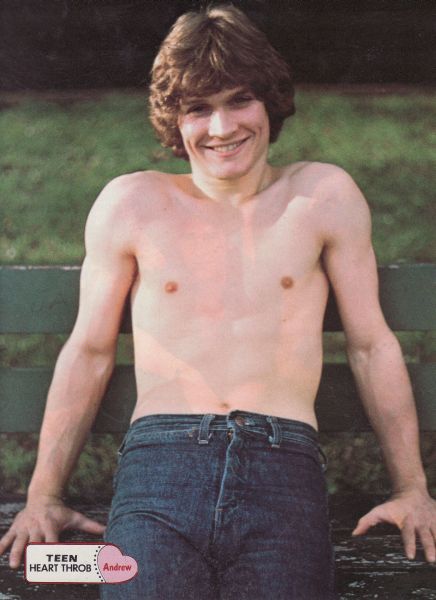 So nice to have a man around the house ... (GIF via DigiComRetro)

Gr8erDays on IG is delving into the hotness of Andrew Stevens. I was thinking I had a lot of deep-vintage hunks lately so a newer one might be a nice change of pace ... then I realized Andrew Stevens has been running around hot AF for about 45 years.

P.S. My header is a reference to Hollywood Wives. Learn it.

This guy's post and story about seeing Madonna perform at a rarely discussed 1983 club date in Fort Lauderdale put a smile on my face. Madonna didn't look exactly like this for very long, it helps to date when she posed for her first album cover re-shoot and the details are so great — she apparently debuted “Holiday” even though she didn't want to!

ABOVE: As my friend who sent me this wrote, it's OnlyFans-adjacent time for Tom Daley.

BELOW: Keep reading for the ongoing Pride NYC vs. cops controversy, E.G. Daily on the gay new Rugrats, the violent death of a crazy cult leader and her sexy Tarzan hubby and more ...

What a fun gig this was for him — he even tap-danced with Ginger Rogers! (GIF via GIPHY)

He was one of those familiar faces who seemed to go on and on. In fact, while his death leaves just two Mary Tyler Moore main cast members (Ed Asner and Betty White), he was the first of the crew from The Love Boat to die — and that's a 40-plus-year-old show.

His career stretched back to the late '50s, and encompassed an astonishing number of early-TV shows.

In his later life, he became an Evangelical Protestant. While I expect I would disagree with him on many issues, his religiosity seemed to be expressed with warmth and kindness, and didn't keep him from good work on something as un-Evangelical as Oz (on which he appeared in 2000).

He's on the left, but any of these would do nicely! (GIF via GIPHY)

Gr8erDays on IG is landing on Mantique of the Day Richard Hatch, the late, great star of Battlestar Galactica.

Gr8erDays on IG is devoted to Bruce Boxleitner, sexy dad from way back. Though he was anything but with his anything butt in those Tron togs!