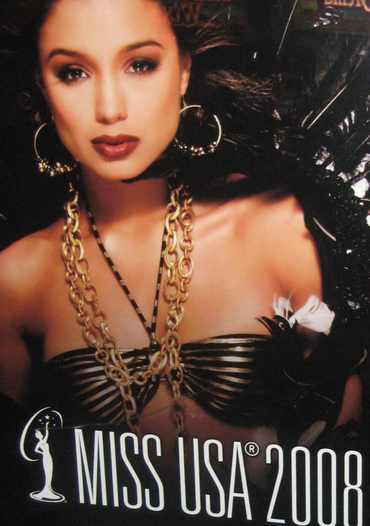 Last Friday, José and I went to Las Vegas to do some girl-watching; specifically, we had tickets for Miss USA. 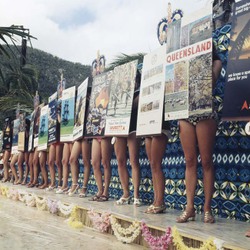 I'm not a pageant person at heart. When I was young, pageants did fit nicely in my fantasy-world outlook—they had glamour for its own sake, they turned women into sex objects (just like I did with my drawings, though for different reasons) and they were usually billed as "special events" on TV, back when there were only a handful of channels and deviations from their lineups were indeed rare.

At some point, I began listening to the girls' answers to The Final Question and was turned off—they always spoke in ways that seemed to me to be in opposition to all that had just preceded that moment. They trumpeted family, the military, Christian values. They struck me as huge phonies—why couldn't anyone see they were sizzling, sexual monsters, not future homemakers of America? It was like how nobody noticed Michael Jackson was a flamboyant queen. In both cases, maybe sequins acted as a protective force field...? 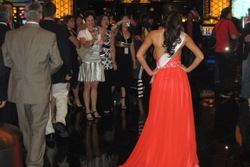 I was wrong, of course—those values did not contradict conservative values. There is a sexual side to conservatism, too, it's just that the male/female sex roles are much more rigidly defined. It's okay for women to be sexy beasts, to flaunt their assets, as long as it's clear they are aimed at pleasing men. Young, hot girls can avoid being liberal sluts if they use their cleavage to attract old, not-so-hot, established men or use their anatomical gifts to satisfy husbands who did things like playing football or fighting our enemies foreign and domestic.

Bombshells are as American as cherry pie; if she talks the talk of the right ("My platform is saving sick children through Bible study!"), the swath of her hips can successfully pass over both the left and right sides of the catwalk.

Of course, some pageant girls in recent years have seemed to break the mold, to not wear their Christianity like a crusading shield, choosing apolitical answers, floating in an irreligious aura, caring about HIV/AIDS. Perhaps we'll have one soon who's against "bullying," a code for queer tolerance.

Of the major pageants, Miss Universe is the cool one despite being owned by Donald Trump, the one less likely to produce Ann Coulters in swimsuits—the girls are from outside the USA (except for Miss USA, who this year is from Texas...which might as well be a foreign country to some other citizens). José is my "Mr. Universe" not because of his Schwarzeneggerdly muscle mass, but because as a Puerto Rican, Miss Universe has been an unending

fascination for him for 38 years, ever since they won their first crown. (Check out how different Miss Universe 1970—PR's first—and Miss America 1970 looked, at right.) Now, 56 years after the first contest, Puerto Rico is second only to the U.S. with five crowns, and there is every reason to believe they'll snatch their sixth this year with Trump favorite Ingrid Marie Rivera. (Yes, she really was pepper-sprayed...there was proof!!!)

The winner of Miss USA goes on to Miss Universe, explaining why we were arriving at the show at Planet Hollywood Resort & Casino on April 11. 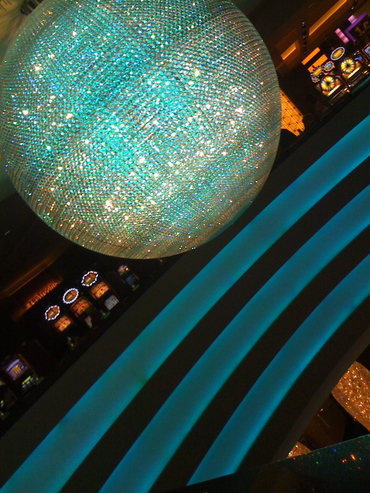 The universal beauty of Planet Hollywood.

The second we arrived, we got out of the cab and saw Chace Crawford of Gossip Girl—his sister, Candice, was Miss Missouri—checked in, saw Donny Osmond (another Republican childhood diversion and, with his sister, the show’s co-host) and then went to the adjacent upscale mall to eat.

The place we wanted was closed and we only had a few hours before showtime. As we walked to our second choice, I spotted a beauty in pink seated at a Brazilian restaurant. “Isn’t that her?” I asked José. I’ll never forget his face as his blank expression was colored with shock—it was her, it was Miss Puerto Rico. She was eating dinner with an entourage that included some cute guys, her trainer (Miss Universe guru Magali Febles) and her frenemy Miss Dominican Republic. She looked lovely, with flawless hair and giant eyes—every inch una ganadora. 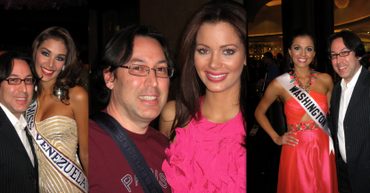 I’m sometimes reticent to ask for photos in a situation like that, but this was an emergency situation—it’s not just, “Oh, there is Famous Person A, I should get my pic with her,” it’s, “There is the embodiment of a hobby I’ve had for 38 years. I’m getting the picture if I have to hold her down.”

Ingrid saw José’s reaction and quickly finished a bite (of salad), washed it down with water and stood to greet us and pose for pictures. She was gracious and composed. “Likewise,” she said when I told her I was pleased to meet her, just like a pageant queen would have said back in the early days of the contest.

When they walked past our restaurant later, José had the video on them and they gave him the sweetest video ever, one that overcame any redness-of-face I experienced as our fellow diners stared at us like we were paparazzi storm troopers. 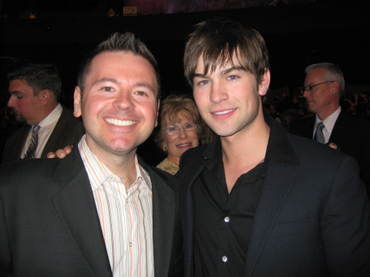 The Chace is on. 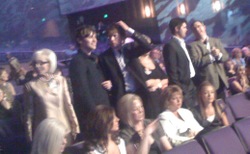 The show itself was lightning fast. I was more interested in pageant-people-watching than anything else—I hadn’t seen so many boobies since What Would You Say To A Naked Lady?—and the moms, whether surprisingly disheveled or preserved like lamb fetuses in embalming fluid, were as fascinating to look at as their too-perfect daughters. Our seats were four rows from the stage (you can see us on the telecast), way ahead of Chace Crawford’s clan. Emboldened by José’s earlier maneuver, I was able to get my pic with Chace, who was as gracious as Miss Puerto Rico and is now my choice for Mr. Missouri. 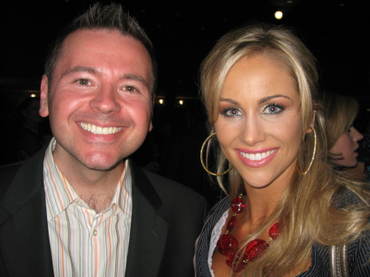 Candice Crawford emerged, after losing, in a spectacular short-shorts outfit.

We had an excellent view of all the judges—yes, Heather Mills was booed by a couple of people, not shocking from a crowd for whom legs are everything—allowing us to see how Rob Schneider and Christian Siriano had to sprint to the restroom at commercial breaks:

The most noteworthy things during the show: How Donny and Marie Osmond 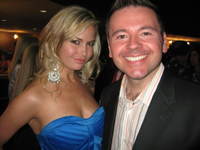 would go from “on” to “off” at breaks, huddling with serious faces when the cameras were not on. Professional to the nth degree. Marie at one point mouthed, “I’m too old for this!” of her dress and laughed, clearly to undercut anyone who might think she was, because she didn’t think she was, and she wasn’t. Donny also went over to chat with Miss South Carolina Teen USA Lauren Caitlin Upton, she of the infamous “maps” answer, after teasing her mildly from the stage. I later got a pic with her. I asked, "Could I trouble you for a photo?" and, living up to her rep, she cooed, "No, not at all!" meaning yes. My head's giant in our shot, but she has a Marilyn-in-All-About-Eve quality.

After, all the judges filed past—I got footage of Days Of Our Lives queen Kristian Alfonso, an obsession of my friend Frank Anthony Pllito who is immortalized in his upcoming book Band Fags!—and José got still more footage of not only Miss Puerto Rico and Miss Dominican Republic, but also Miss Venezuela, Puerto Rico’s always-rival for the crown. Seeing those exotic beauties in the audience as America’s contestants duked it out could not have been comforting to the ladies on stage; I don’t see the impressive Miss Texas as a world-class contender, but we’ll find out July 13 at Miss Universe. 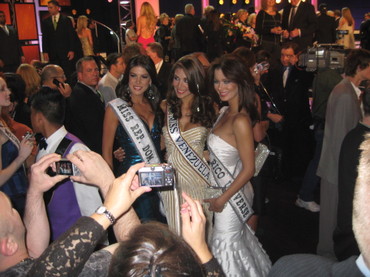 I had a lot of fun with my Miss USA experience, even if I suspected I’d have little in common with most of its most hardcore devotees, mainly because I focused on the aspects that united us—a shamelessly visual appreciation of startling beauty, a kneejerk tendency to tear it apart, a voyeuristic love/hate with celebrity and a tribal worship of anything on the tee-vee.

TONS of pictures and video after the jump...