ABOVE: A Times Square welcome!

BELOW: Keep reading for all the singlets you can handle, Trump's DOJ is now Trump's personal law firm, Biden knocks Trump for new revelations that POTUS lied about COVID-19 from Day 1 and more ... 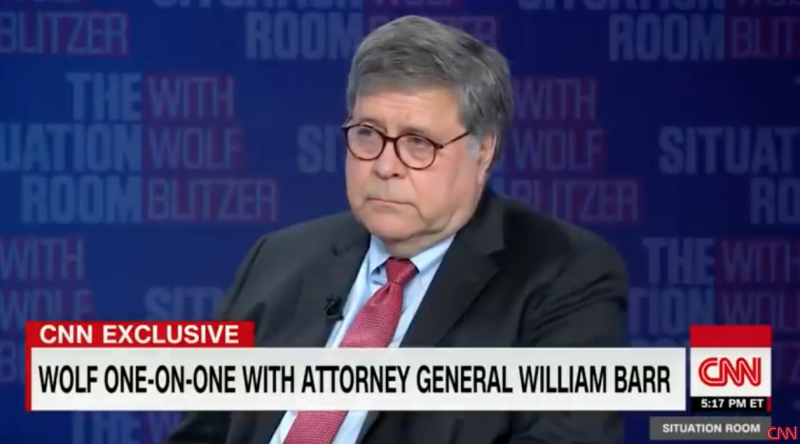 Barr needs to die in prison. (Image via video still)

Barr is worse than Trump, and possibly as powerful. Here, he obtusely claims not to understand the issue with Trump encouraging people to vote twice to test the safety of voting by mail, claims not to know if that is illegal in every state and firmly states that mail-in voting is inherently fraudulent.

The most chilling part:

Barr: So far, we haven't tried it.

I honestly think this whole obsession with mail-in voting being fraudulent is Trump and Barr telegraphing that they know 2016's vote was fraudulent — in Trump's behavior.

Berman retorted that it was the first he'd heard of it, and that he had no intention of resigning.

Despite the optics of a man firing the man investigating him, Trump doubled down, officially firing Berman.

Now, Trump will nominate Jay Clayton to take over — even though he has zero experience as a prosecutor. But he's chairman of the SEC, and is unlikely to pursue cases against Trump with the vigor displayed by Berman, who has successfully gone after Michael Cohen and was said to be circling Rudy Giuliani.

All of which is the say that in a normal time, Barr would be impeached and Trump would be re-impeached, but instead — just vote these assholes out and we'll re-hire everyone.

ABOVE: I love a candid!

BELOW: Keep reading for gay mags, a gay weatherman fired for being the voice of reason, Pence's aide tests positive as Pence completes a phony PR stunt and more ...