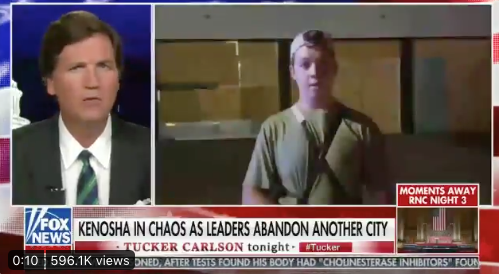 Two sides of the same coin (Image via video still)

Tonight, Tucker Carlson shamelessly sympathized with Kyle Rittenhouse, 17, who has been arrested and charged with first-degree murder for his actions in Kenosha last night.

How shocked are we that 17-year-olds with rifles decided they had to maintain order when no one else would?

This line of attack — that Democratic-run states and cities are a hellscape where anything goes and where white people are in danger (I believe Rittenhouse killed white people, albeit marching for BLM ...) — has bee used over and over at the RNC, and will likely be the most used (and effective?) gambit of Trump's closing as we barrel toward the November election.

Carlson should be fired.

When you read headlines of people being shot and killed during social unrest and protests, the immediate thought is that the headline is attempting to communicate: Why are these people killing each other?

LOOK AT THIS CLIP! LOOK! THEY ARE WORKING ALONGSIDE THE POLICE pic.twitter.com/BPL5clfjrc

That is not what is happening in Kenosha. Rather, armed militia have come into the area to help police — and police are thanking them for it! — and a 17-year-old vigilante shot two people to death and wounded a third overnight.

It is being reported that the shooter is a 17 year old who drove to #Kenosha from Antioch, Illinois with an AR-15 looking for trouble. He murdered 2 people and wounded a man who will lose his arm as a result.

Where is @realDonaldTrump complaining about outside agitators? pic.twitter.com/dBaF7R88zK

The police let the kid go after he murdered two people in cold blood. Watch the video:

Kyle Rittenhouse 17 years old
from Antioch, IL shoots a man in the head with an AR-15 & kills him in Kenosha. He also shot 2 more people killing 2.

Evades street justice by running toward cops with an AR-15
AND the Police just let him go!

This is a preview of what we will have in store if Trump gets four more years — a rise in vigilanteism with no consequences, and the fucking police let him go!

Wisconsin Republicans decided to have an in-person GOP convention on Saturday, and being Republicans, masks were not required.

Human pond scum Rep. Glenn Grothman (R-Glenbeulah) really kicked things off with a bang by lapsing into a coughing fit from the stage while attempting to say Trump's name ...