ABOVE: Beginning your day with the perfect end.

BELOW: Keep reading for a hotter Spider-Man than Tom Holland, the final chapter for EastSiders, gay basher caught, Kavanaugh continues to crumble (or is about to get forcibly seated on the SCOTUS), Keiynan Lonsdale's pronoun request takes root and much more ...

Singer likes to "skinny dip in a pool of tweaked out barely legal twinks..." but is "no rapist." 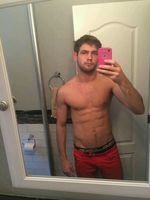 Pink and red and Duncan Black all over.

Singer says he wasn't even in Hawaii at the time of the alleged assault.

When gay marriage was just a union of "two faggots."

This Andrew Christian model wears, and deserves to be, a Trophy Boy.

Orange Is the New Black returns:

If you're not sure whether you're a basic bitch, you probz are.

IT'S SO BEAUTIFUL: I Am Divine debuts digitally tomorrow.

Elton John & David Furnish: It's their “duty” to marry.